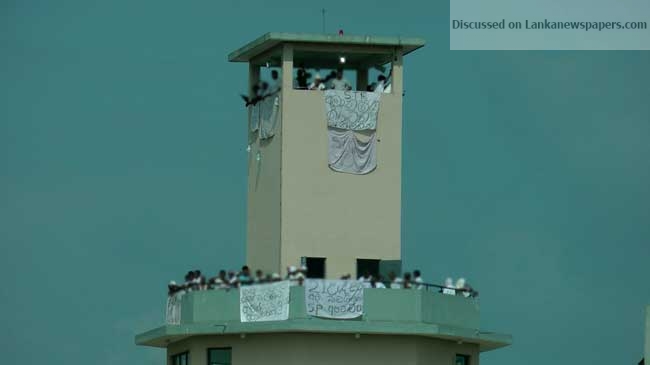 The protest launched by the inmates of Angunukolapelessa Prison has been called off, said Ada Derana reporter.

The inmates have agreed to come down from the observation tower following discussions with the authorities.

A group of inmates of the Angunukolapelessa Prison are engaged in a protest since yesterday (21) against the deployment of STF officers for the security of the prison.

Firstly a group of 40 inmates had got on to the roof of an observation tower and then later, more inmates joined them. Reportedly, they continued their protest throughout the last night as well.

Protestors demanded the removal of the STF officers deployed to ensure the security of the prison as per orders of the Ministry of Justice and Prison Reforms.

Meanwhile, the ministry has decided to conduct a special investigation into how the inmates from Angunukolapelessa got out of their cells in the first place. A special team is to be sent to Angunukolapelessa Prison regarding this, today (22).