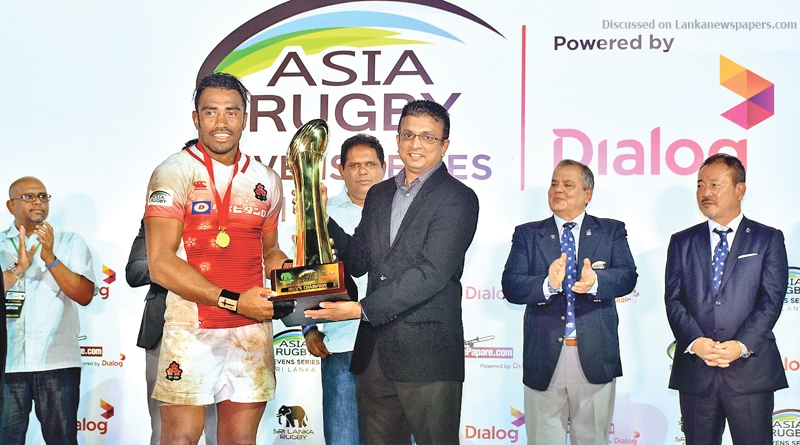 For Sri Lanka women their captain Ayesha Wijethilake scored the solitary try with Ayesha Kaluarachchi slotting in the vital conversion. Thanaporn Huankid scored the only try for Thailand women.

Earlier in the day Sri Lanka women lost to Asian champions Japan 29-nil but thrashed Singapore women by 40 points to nil in the Plate championship semifinals.

This is the first time in the country’s rugby history that the women’s rugby team has won the Plate championship three in a row in a single Asian sevens series three leg rugby tournament. The team was coached by former Sri Lanka national men’s sevens rugby captain Sudath Sampath.

Meanwhile the Sri Lanka national men’s rugby team ended up a disastrous fourth position when they were stunned to defeat by minnows and last year’s sixth placed Philippines by 7 points to 19 after trailing 7-14 at half time in the third place play off.

The solitary try for Sri Lanka was scored by winger Naveen Henakankanamge and the conversion was put over by scrum half Reeza Rafaideen. Sri Lanka began the second day yesterday with a 12-21 loss to Hong Kong in the final group match with Kevin Dixon and Reeza Rafaideen scoring the two tries for Sri Lanka.

Thereafter the Lankan Tuskers were knocked out in the Cup semi-finals by Japan who won easily by 34 points to17. The Tuskers three tries were scored by Dinuk Amarasinghe, Kevin Dixon and Omalka Gunaratne.

Japanese men clinched the Cup Championship as well as the overall championship with a runaway 19 points to 5 win over Hong Kong in the final. The Plate Championship was bagged by China who scored a thrilling 24-21 win over Malaysia. The 7th place play-off was won by South Korea who overcame Chinese Taipei 15-12.

Japanese women clinched the Cup Championship to follow their men’s achievement with a 31-nil thrashing over Hong Kong in the final. China won third place beating Kazakhstan 17-12 in injury time. The 7th place play-off was won by South Korea who overcame Singapore by 19 points to 15.