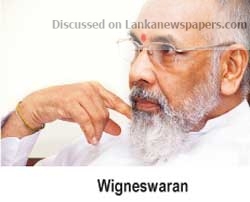 Northern Province Chief Minister C.V. Wigneswaran said on Friday said that he had requested the TNA leaders to vote against the budget in Parliament in Nov. if the government did not release Tamil detained under the provisions of the Prevention of Terrorism Act (PTA).

Addressing the media at the Chief Minister’s office in the Northern Provincial Council, the Chief Minister said that he had conveyed his request to the representatives of the NPC and the civil society organisations.

The Chief Minister said that the Tamil prisoners had been the ones who had carried out the orders given to them by LTTE leaders including Karuna Amman. It was unfair to make them languish in prisons while those who had given

the orders were at large. “Karuna Amman and other leaders who led those youth are moving freely in society. Youth who carried out their orders have been behind bars for 18 to 19 years.

“We decided during the discussion to request the TNA to inform the government that they should vote against the budget if Tamil prisoners are not released immediately. We should not let the government dupe the TNA any further.”