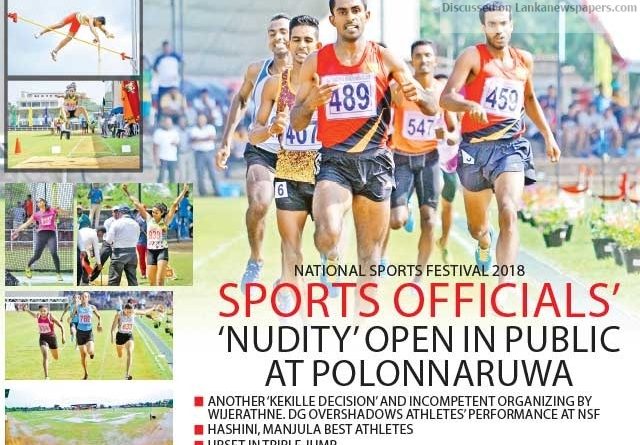 Director of Sports, I.P. Wijerathne and Director General of Sports, Buwaneka Herath’s incompetency resulted in another shameful incident at the National Sports Festival. Thrower Charith Kapukotuwa was disqualified after he won the Gold medal of the Shot Put event following a protest by two other Provinces.
Former Anandian Kapukotuwa, who is now based in the United States, came all the way from US to Polonnaruwa looking for glory in home conditions, as he requested permission to participate in this championship following impressive performances in US domestic championships.
His request was accepted and he was permitted to compete in the event representing North Western Province. He won three Gold Medals winning the Hammer Throw, the Discus Throw and the Shot Put, while also setting a new meet record in the Hammer Throw.
Southern Province and Western Province protested against the participation of Charith Kapukotuwa citing he is not eligible to take part in the competition according to National Sports Festival rules and regulations.
The argument was Kapukotuwa had been entered for the competition without competing in the provincial stage of the NSF or showing performance during an approved international event.
Director General of Sports Buwaneka Herath, after consulting Wijerathne and others, took a decision to disqualify Kapukotuwa from the Shot Put event only, stating that the other protest (for Hammer Throw) came after the deadline – which is 45 minutes following an event. DG then asked Kapukotuwa to return the Medal, fearing the Southern Province officials will create a scene in front of President Maithripala Sirisena in the afternoon if they did not disqualify Kapukotuwa from the event.
But Kapukotuwa refused and took off from the venue after he got the Medal. He argued that he was eligible to compete as he was cleared when given the BIB numbers and competed two days without a problem, and was puzzled as to why there were protests after he won three Gold Medals.

Also, experts argued that if Kapukotuwa was in fact ineligible, shouldn’t he be disqualified from all the events in which he participated, not just the Shot Put?
“I was allowed to compete and I showed that there was no better competitor than me in these events by winning all three Gold Medals.

Protests like this is ridiculous and they asking me to return the medal is even more ridiculous. I don’t even feel like coming back to Sri Lanka to compete when these kinds of officials are in charge of athletics,” said Kapukotuwa who was dejected by the incident.
This wasn’t the first time that incompetent officials had blundered. The Department of Sports Development led by I.P. Wijerathne is in chaos, as earlier too Sports Officials protested without participating at the closing ceremony of the last National Sports Festival due to another decision made by them during the competition .