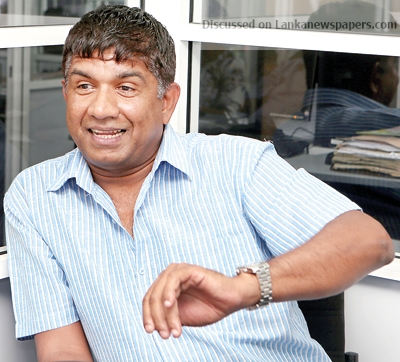 Pramodya Wickremasinghe an integral part of Sri Lanka’s ICC cricket World Cup winning ensemble says it is high time that Sri Lanka Players Association shelve all their differences and come out in one voice to save the day for cricket in Sri Lanka.

Speaking to the Sunday Times Wickremasinghe said “We have spoken to the President of the country, the prime minister and the sports minister asking them to clean up the stables of Sri Lanka Cricket, because it is the only game that we have remained in the higher echelons of sport for the past 25-years or so and also been involved in the game for two hundred years or more.”

Right now the game of cricket in this country is in a shamble and the most hurt are the past players who played the game diligently and brought forth many an accolade. Now what happens is the players indulge in the game and it is some crooked official who finally reaps the benefits and this situation has to be unrevelled.

Right now we are in the process of talking to past cricketers. We must shed our differences and come out as one voice and if this could be achieved we could become the force that could resurrect the game.

Right now the players association is not recognised by the Lankan cricket authorities and it is paramount that this deadlock has to be upturned.

Besides, Wickremasinghe also has put out a statement on the prevailing situation and the media statement says: I have made several media statements in the past with regard to calling for a proper inquiry by a Competent Authority to ensure that the players have the proper environment to play the game in performing to the best of their ability.

The said sentiments have been expressed by me in the best interest of the game, players both past and present and mother Lanka.

The main reason for me to speak out was, when the cricket loving public reacted to the performance of the team by throwing bottles onto the field last year. I emphasized that we should not subject our players to the ridicule of the cricket loving public. There is no doubt in the ability and the talent of the current players in the Sri Lanka squad. In those circumstances I called for a thorough investigation into matters of this magnitude that would have helped the players to have a clear mind in concentrating on the game without having distractions that hamper their ability to display their natural talent.

I also called for an independent inquiry without the involvement of the SLC due to the conflict of interests. I urged for a Presidential Commission and for COPE to have an inquiry since the funds utilised by SLC are public funds and there has to be transparency and accountability. In my press release on the 23rd of September 2017 I foretold the following;

“If we fail to take any action at least to investigate the truthfulness of the said allegations, we will be subjecting ourselves for International Organisations like the Anti Corruption Unit of the ICC to initiate inquiry into the affairs of Sri Lanka Cricket and the players.”

To my dismay and disappointment, my warnings fell on deaf ears and the outcome is the global humiliation faced by Sri Lanka among the cricketing fraternity when the ICC has been vocal pertaining to corruption investigation in Sri Lanka.

We have come to the critical hour of salvaging Cricket in Sri Lanka from those who have their personal and vested interests filled with corruption and utilising the funds for their personal benefit with callous disregard for the game of cricket. I appeal to all the past cricketers who have brought glory and honour to the game of cricket and mother Lanka to come forward. Together we will be able to eliminate the unsavoury elements from the Administration and hand over the future of cricket in Sri Lanka to capable hands.

We love the game of cricket and remember with pride our glory days in playing for our country.