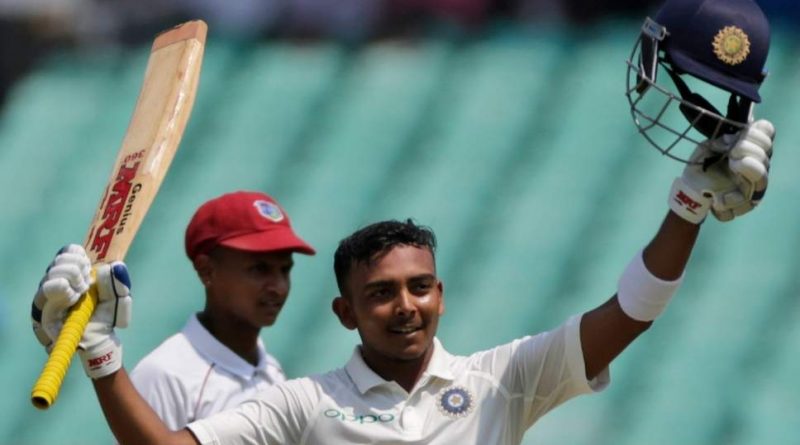 Indian batting sensation, Prithvi Shaw, is as known for his humility as his ability but that will be sorely tested in the coming weeks after the plaudits rained down on him like a monsoon after he became the youngest Indian to make a century on Test debut against the West Indies in Rajkot this week.

The 18-year-old from Mumbai has had to wait for his Test debut, held back by Indian selectors looking for the right time to blood a cricketer who has already re-written the Indian cricket’s record books.

But after scoring the first hundred of his Test career in his first innings – off just 99 balls – they might find it impossible to leave him out in future.

Virender Sehwag, VVS Laxman, Sanjay Manjrekar and Harbhajan Singh immediately hailed a performance that will only serve to heighten the hype around a cricketer who has already and inevitably been saddled with the ‘new Sachin Tendulkar’ tag.

Not that it seems to bother him.

Since scoring 546 off just 330 balls as a 14-year-old for his school, Rizvi Springfield, in India’s Harris Shield in 2003, the diminutive Mumbai sensation has been identified as a Test player in waiting.

Now that wait is at an end, he appears in a hurry to make up for lost time, despite still being a month shy of his 19th birthday.

Shaw was called up to the India squad for the final Test of this summer’s series against England, an indication, not only of the esteem he is held in but also the struggles of India’s top order against the likes of Jimmy Anderson and Stuart Broad.

The call didn’t come at the Oval but India’s cricket-mad public haven’t had to wait too long to celebrate his arrival on the biggest stage.

Shaw didn’t disappoint and although this West Indies’ side is a pale imitation of the one faced by Tendulkar in the early days of his career, the prolific teenager won’t give that a second thought.

With seven hundreds in 14 First Class matches, it was hardly a surprise that he scored another in Rajkot – little wonder that comparisons have been drawn between him and Mumbai’s original Little Master.

“His grip, his stance, he stays very still at the crease and plays all his shots around the wicket,” said Mark Waugh after watching him play for the Delhi Daredevils in this year’s Indian Premier League (IPL). “He plays the ball quite late and is quite punchy in his strokeplay and has an excellent base to play any shot from any bowler. He’s just so much like Sachin Tendulkar.”