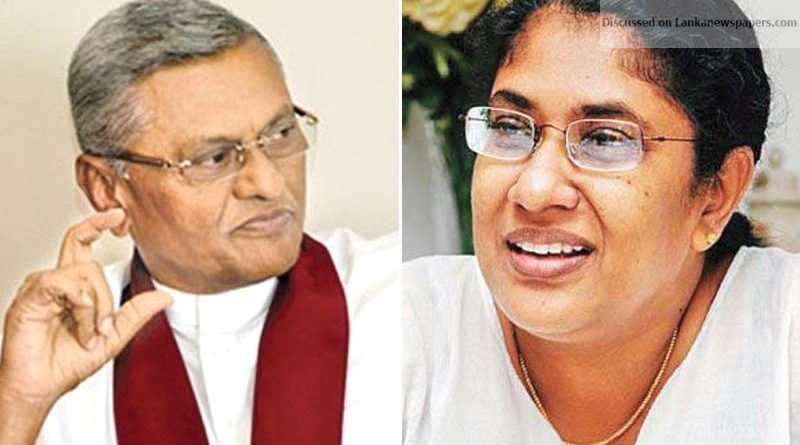 Justice Minister Thalatha Athukorale and former Speaker Chamal Rajapaksa are likely to be appointed as members of the Constitutional Council, when Prime Minister Ranil Wickremesinghe returns from an official visit to Norway and London this week, authoritative sources told Sunday Observer.

Together, the Prime Minister and the Opposition Leader, who are ex officio members of the Constitutional Council must nominate five members to the Council, including two members of Parliament and three civil society representatives, drawn from all three major ethnic communities in the island.

Athukorale, who serves as Minister of Justice and Prisons Reform is likely to be Prime Minister Wickremesinghe’s nominee, while UPFA MP aligned to the Joint Opposition, Chamal Rajapaksa will be nominated by the Leader of the Opposition R. Sampanthan, Sunday Observer learns.

President Maithripala Sirisena already named Minister Mahinda Samarasinghe as his nominee to the CC on September 17. One other MP must also be nominated by Parliament, outside of the parties to which the Premier and the Opposition Leader belong.

The former Speaker’s nomination as a MP on the Constitutional Council is being made as a concession to the JO, which counts 70 members in its ranks but cannot be recognised as the legitimate opposition since half the UPFA is part of the Government, the sources said.

CPA Executive Director and leading civil society activist Dr. Paikiasothy Saravanamuttu was to be nominated as a civil society representative on the CC, but the JO has threatened to oppose the nomination, Sunday Observer learns.

The three civil society representatives on the CC must be approved by Parliament. The three names are, therefore, still under discussion, but will be finalised once Premier Wickremesinghe returns, sources told the Sunday Observer.

The term of the last Constitutional Council lapsed on September 21, nearly two weeks ago. The Speaker of Parliament, the Prime Minister and the Opposition Leader are ex-officio members of the Council. Two more legislators and three civil society representatives make up the 10 member Council.

The Constitutional Council is the final authority on key appointments to the judiciary and independent commissions, including a major nomination coming up later this week, as the current Chief Justice Priyasath Dep completes his tenure as the head of Sri Lanka’s judiciary on Friday (12).

Deputy Secretary General of Parliament Neil Iddawela told the Sunday Observer that since the current Constitutional Council is lacking a quorum of six members, the appointments will have to be made as soon as the Prime Minister returns to the island. Constitutionally, President Maithripala Sirisena must forward the name of his nominee for Chief Justice to the Constitutional Council, which must then approve the nomination.

“If the appointment of a new Chief Justice is delayed, the President can appoint a temporary Chief Justice for a period of not more than 14 days,” Deputy Secretary General Iddawela explained.