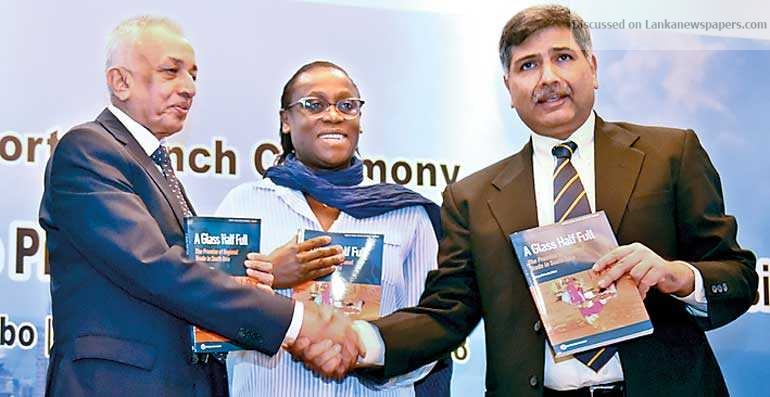 Sri Lanka has the potential to more than double exports to South Asia, suggests a new World Bank report titled ‘A Glass Half Full: The Promise of Regional Trade in South Asia,’ launched in Colombo yesterday.

“If trade barriers are overcome, trade within South Asia can increase three-fold, from $ 23 billion to $ 67 billion. Increased intraregional trade will provide a greater variety of goods and services at cheaper prices for Sri Lankan consumers, better access to inputs for producers and exporters, increased investment, export diversification and growth,” the report said.

Noting that South Asia was the world’s most rapidly-growing region as well as the world’s least integrated region, the report pointed out that man-made trade barriers had hampered intraregional connectivity and kept South Asian countries from maximising their prospects.

According to the report trade within South Asia accounts for only 5% of the region’s total trade, compared for 50% in East Asia and the Pacific. Sri Lanka’s exports to South Asia are equivalent to only 11% of its global exports.

The report helps to quantify commonly known benefits associated with a more integrated South Asia. For example, the actual value of Sri Lanka’s exports to South Asia is $1.2 billion, but the potential value is $2.8 billion. This $1.6 billion gap between the two is equivalent to 15% of Sri Lanka’s total global exports. Closing the gap will not only enhance but also help diversify Sri Lanka’s trade.

“There is evidence that Sri Lanka will benefit financially and improve its services sector and human resources if it removed trade barriers and invested in better connectivity,” World Bank Country Director for Sri Lanka and the Maldives Dr. Idah Pswarayi-Riddihough said.

In addition to tariffs, para tariffs such as port and airport development levy and cess create an anti-export bias. Para tariffs more than double the average import tariff in Sri Lanka.

Limited air connectivity with South Asia also raises the cost of trade, particularly in services. One success story is air services liberalisation between India and Sri Lanka. Increased air connectivity between the two countries since 2003 has lowered costs, and increased passenger traffic and the volume of air cargo. There are now 147 weekly flights between Sri Lanka and India, and since 2005 India has been the biggest source of tourist arrivals in Sri Lanka. The number of Indian tourists tripled from 113,323 in 2005 to 356,729 in 2016, as a result.

“Air services liberalisation between Sri Lanka and India serves as a potent example for the rest of South Asia,” World Bank Lead Economist and lead author of the report Sanjay Kathuria said.

“Given the region’s complicated history, size asymmetries, and a trust deficit, policy shifts need to be implemented gradually. Air services liberalisation entailed small steps backed by policy persistence which cumulatively made a substantial impact,” he added.

Recommendations provided in the report include targeting sensitive lists and para tariffs to enable real progress on SAFTA. It also calls for a multi-pronged effort towards addressing non-tariff barriers, focusing on information flows, procedures, and infrastructure.