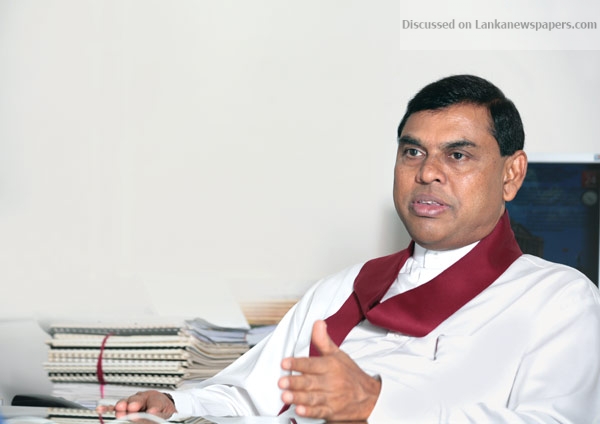 Emerging from the new Permanent High Court at Bar in Colombo where his trail was put off for December 4, Gotabhaya Rajapaksa accused the government of trying to create a rift among his politically ambitious siblings.

Asked what he thought of reports that former president Mahinda Rajapaksa was trying to promote basil over him (Gotabhaya), he said the reports were circulated by the government to create dissension within the family.

“But, if you ask me, my choice for a presidential candidate is Basil Rajapaksa. It is up to president Mahinda Rajapaksa to decide, I don’t think he has decided yet,” Gotabhaya Rajapaksa told reporters.

Neither of the two brothers can contest the presidency or even a seat in parliament unless they renounce their US citizenship.

On a previous occasion, Gotabhaya has said he could shed his US nationality and retain only Sri Lankan citizenship “within two months.”

In May, Gotabhaya had launched his de facto presidential bid by launching what he called his Vision 2030 in the presence of some 2,000 invitee at the Shangri La hotel in Colombo.

Gotabhaya suggested Basil as a possible presidential hopeful as his criminal misappropriation of state funds case entered its trial phase after a near three-year investigation. He is accused of spending millions of rupees of government money to build a museum for his late parents.

His remarks came amid rumours that the Mahinda Rajapaksa-led SLPP, a breakaway faction of the Sri Lanka Freedom Party (SLFP) was going to unite with President Maithripala Sirisena to form an “caretaker” government.

Housing Minister Sajith Premadasa Monday dismissed reports of a “caretaker” administration and said he had full confidence in President Sirisena to honour his January 2015 mandate to work with the current coalition.

Premadasa said Sirisena risked his life to defect from the SLFP and challenge an autocratic presidency of Rajapaksa in 2015.

Constitutionally, the president has no power to form any other government without dislodging Prime Minister Ranil Wickremesinghe who can only be toppled through a no-trust vote in parliament.

An attempt to oust Wickremesinghe failed in February as well as in April and led to the breakup of Sirisena’s faction of the SLFP with a group of 16 crossing over to support the Rajapaksa faction.

Even if both Rajapaksa and Sirisena factions unite, they are still short of a considerable number of votes to bring down Wickremesinghe.