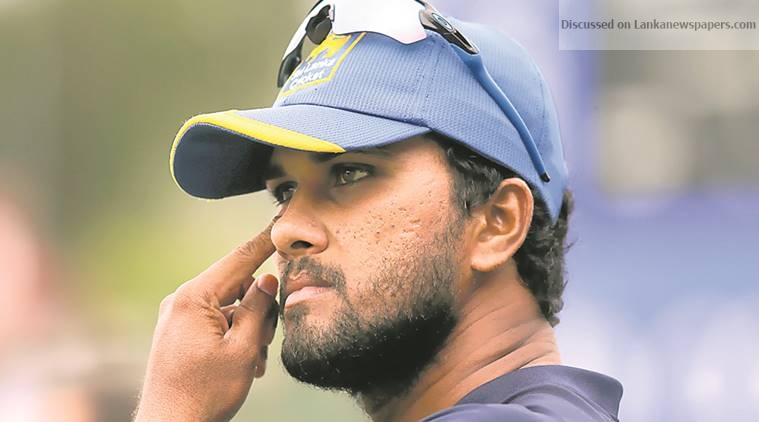 An ODI team on a long stretch of terrible form, a first-round exit from an important tournament in their wake, and a new captain charged with turning fortunes around – Sri Lanka are here now, but England were there not so long ago.

The similarities between Sri Lanka’s present plight, after crashing out of the Asia Cup last month, and England’s situation following their group-stage exit in the 2015 World Cup, are unmissable. Both teams have been charged with playing an outdated style of ODI cricket. Both sides have experienced substantial upheavals over the preceding year. They each have rumours about indiscipline swirling about.

Sri Lanka’s new one-day captain Dinesh Chandimal has noted these parallels, and has taken heart. If it is possible for England to raise themselves out of a funk and to the top of the world rankings in only three years, perhaps the outlook need not be so bleak for his own team. The first discipline that needs serious attention, he thinks, is fielding.

“I actually did go back and look at where England were in one-dayers – they didn’t even make it out of the group stage of the 2015 World Cup,” Chandimal said. “They were really struggling back then. One of the main things they have got right since then is that their fielding has been excellent. That’s a big lesson for us, because we’re in a similar place to where they were in terms of one-day cricket. If we can apply those lessons, then we will be able to defeat this No. 1 team, and it could be a big turning point for us.”

Awful fielding has dogged Sri Lanka since 2015, with successive coaches having attempted various fixes, including fielding-intensive training sessions and punishments for dropped catches. The board had even brought Jonty Rhodes to Sri Lanka for a 10-day fielding camp at one stage. Catching standards, nevertheless, have continued to be poor, with at least three chances going down across the two recent matches at the Asia Cup.

“That’s the biggest change we are trying to make in this series – give priority to our fielding and give it a lot of attention,” Chandimal said. “We know that with the opposition’s batting or bowling, you can’t control that on the day, but we can control our attitude and energy on the field. That’s one area we’ve identified – somewhere we’ve failed in one-day cricket. In the last few days we worked really hard on our fielding individually and as a group.”

In addition to being tasked with turning around the fielding and generally returning Sri Lanka to their former ODI glory, Chandimal must also ensure he is a performing member of the XI himself, with the bat. Although he has had periods of heavy run production, Chandimal’s modest scoring rates have often been seen to exemplify the kind of outdated one-day cricket Sri Lanka are accused of playing.

He hadn’t always been a conservative batsman, however. In his earliest years in international cricket Chandimal was almost relentlessly aggressive, and that is a part of his game he is trying to rediscover, with help from coach Chandika Hathurusingha.

“When I first arrived I batted very aggressively, but after you play for a while you are burdened with team responsibilities and maybe have to play a different way,” he said. “There have been some setbacks along the way in one-day cricket. But a lot of the time now the coach is talking to me about going back to my normal game now. I’m thinking about playing the ball on its merits rather than thinking too much about the match situation. I think I’ve had some success with that over the last few weeks. I’m hoping for more in this series.”