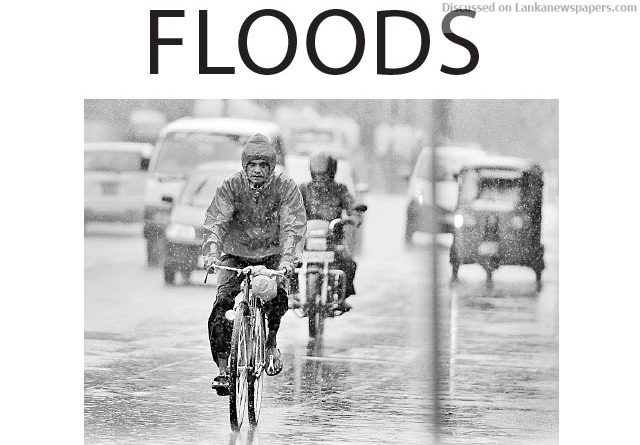 Floods in May 2016 and May of last year, killed and injured several and made hundreds or more homeless and destitute in Colombo and in the suburbs.
Hopefully such disasters will now be a thing of the past due to an ongoing US$ 313 million World Bank (WB) Project to protect Colombo and its environs from flooding.
Nonetheless, a test case is how this project, to be completed by 2020, will face the ongoing monsoonal rains.‘Four years into implementation, the project has already delivered important outcomes’, the WB in a report filed on 24 September, nevertheless said.
While it’s early to gauge the impact of yesterday’s rains because it’s ongoing at the time of going to press, but this of a certainty is known: On Tuesday, Colombo and its suburbs witnessed heavy rains which are at least similar to the current rains in intensity.
A source from the Meteorological Department told this newspaper that on Tuesday, Colombo recorded a rainfall of 67.6 millimetres (MM) in the 24 hours ended at 8:30 a.m. This compares with a low rainfall figure of 1.9 MM recorded in the immediately preceding 24 hours. Despite this heavy rainfall, no flooding in Colombo was reported. Previously, even a low rainfall of 25 MM was sufficient to flood Colombo or certain parts in Colombo, or both.
This transformation may be attributed to the ongoing WB Project.
The WB said that the change in the status quo was due to the ongoing flood protection project where it said that once completed, will give Colombo’s 232,000 residents living in flood prone areas greater direct protection from flooding.
The entire city will benefit from the project’s ‘quality of life investments’, the WB said, adding that the project’s milestones already achieved included increasing the drainage capacity of the gravity system by 110 cubic metres (end target: 185 cubic metres) and  implementation of three micro-drainage projects, thereby reducing the risk of flooding in localized areas, ‘guaranteed’ for 10 years.
They are the ‘Rehabilitation of St. Sebastian South Canal in Colombo North’, ‘Improvements to Main Drain, Mutwal Tunnel and Aluthmawatha Culverts’ and ‘Improvements to Sewerage Distribution Network around Beira Lake.
Other milestones achieved included, 75% of users having had indicated that they are satisfied with the Beira Lake Development (end target is 80% of users including Beddagana and Kotte Ramparts Parks); built and rehabilitated 45 kilometres of roads and drainage that have achieved project standards (fully achieved end target); improved four km of primary canals to reduce flooding (end target 9.2km).
Upgraded and revitalized three public spaces and parks (fully achieved end target) and constructed 16 public convenience complexes (fully achieved end target); helped build coordination among different State-run metropolitan level agencies and prepared large and complex flood-reduction works.
‘The project has realized the economic value of wetlands and increased awareness of the importance of wetlands conservation’, the WB said.
The creation of public parks and spaces and capitalizing on public spaces and wetlands has also enhanced livability and walkability. ‘Understanding the importance of wetlands conservation will increase Government’s ability to use these assets for flood control and temperature moderation,’ the WB said.
In addition, the project supports asset maintenance strategy to help local authorities better maintain and operate infrastructure supported by the programme.  Through the implementation of the drainage components and major flood reduction infrastructure, the staff of the participating State agencies will develop skills and capacities to complement the Colombo Metropolitan Region’s development requirements, the WB said.
Meanwhile, we can remember that at least in the late 1960s, despite heavy rains experienced in Colombo and the suburbs then, neither the Capital nor its suburbs ever went underwater. This was because the natural water retention and drainage sites in Colombo and its surroundings were untouched by development.
But unplanned development, a post 1977 open economy phenomenon, gathered momentum over the years and is the cause of flooding currently faced by Colombo. Another classic case was the great flood of 1992. Therefore, it’s imperative, that the current good work begun by the WB to mitigate flooding is sustained.
This could be done if there is no political interference, zero tolerance on corruption and the application of the full force of the law to protect what remains of Colombo and its suburbs’, wetlands and natural flood protection, water retention and drainage sites.