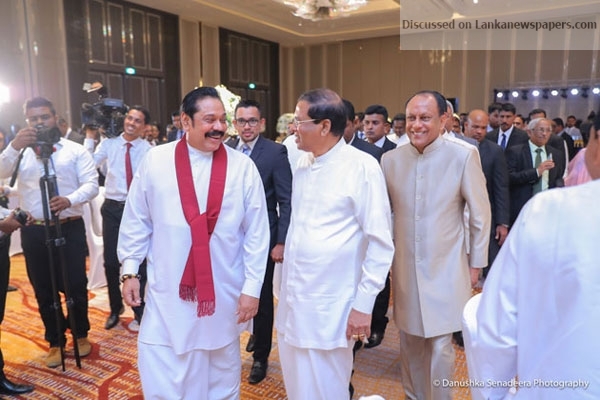 In a desperate attempt to retain the presidency after 2020, President Maithripala Sirisena has pitched an idea to the Joint Opposition to form a Caretaker Government after defeating the budget of his own government in November.

The President, according to top political sources, had turned to the Joint Opposition after the UNP turned down his idea to make him the party’s Common Candidate at the next Presidential election.

The UNP has officially informed the President that it will field its own candidate at the election, without opting to back a Common Candidate. The party has also conveyed to Sirisena that it cannot ask UNP supporters to vote for him, as the President was harshly critical of the UNP and its leader over the past 12 months.

Irked by the UNP’s response, the President has then approached the Joint Opposition, Asian Mirror learns. The communication between President Sirisena and former President Mahinda Rajapaksa has been facilitated by a senior Parliamentarian of the ‘SLFP 15 Group’.

Sources close to Sirisena said, the Caretaker government would be the first step towards securing presidential candidacy of the Joint Opposition in 2020.

“Former President Rajapaksa can be the Prime Minister under President Sirisena in the Caretaker government. The same arrangement can continue after the next Presidential election. Rajapaksa can support President Sirisena at the Presidential election and the President will support Rajapaksa at the Parliamentary election. The President has already made it clear that under the 19th Amendment to the constitution the Prime Minister is the central figure in the government. Therefore, the former President will receive his due place in a future government” a senior Parliamentarian working towards a true between the two political rivals told Asian Mirror.

However, the Joint Opposition has not given a clear response to the President’s proposals. But, it is learnt that the group has given the green light to the President to proceed with the talks.

When contacted by Asian Mirror, a senior Cabinet Minister representing the UNP said the so-called Caretaker government was part of someone’s ‘colourful imagination’.

“It has been proven time and time again that they don’t have numbers in Parliament to topple the UNP-led government. The latest demonstration of this reality was the no-confidence motion presented against the Prime Minister. The Prime Minister mustered the support of 122 MPs in the House including those of the Tamil National Alliance. Therefore, defeating the budget 2019  – I am sad to burst their bubble – is a far-fetched dream,” the Minister, also a close associate of the Prime Minister, said.