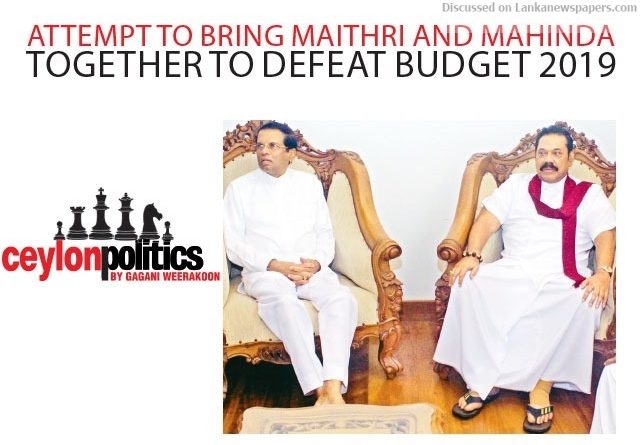 Finance and Media Minister Mangala Samaraweera recently presented the Appropriation Bill to the Cabinet which states that next year’s   State expenditure will be Rs 4,376 billion and the budget deficit will be Rs 644 billion which is 4.1% of the GDP.

The highest amount of allocations under the Appropriation Bill, which is to be presented to Parliament by Minister Samaraweera on Tuesday (9), has been made for the Ministry of Defence. The allocation for Defence in the year 2019 is Rs 306 billion. A sum of Rs 221 billion has been allocated for the capital and recurrent expenditure of Provincial Councils.

At the same time, capital expenditure of several Ministries including, Education, Health, Provincial Councils and Local Government, Finance, Fisheries, Agriculture and Megapolis and Western Development have been increased.
The Government revenue in the year 2014 was 11.5% of the GDP and, it was gradually increased after the unity government came into power and, it is expected to be increased to 15.1% of the GDP in 2019, the Treasury stated.
At the same time, a surplus was reported for the first time after 63 years in the Government’s Primary Balance in 2017 and, it is expected that this surplus will increase by 1.3% of the GDP in 2019.
Rs 2,057 billion has been allocated for debt servicing in 2019. This is the largest amount of money a Government in the history of this country is compelled to bear in repaying its borrowings. Out of this amount, Rs 1,271 should be paid locally next year while Rs 786 billion, which is equal to 4,650 million US dollars should be paid to foreign lenders. Accordingly, the Government expects to borrow Rs 1,944 billion from local and foreign sources for its debt servicing including the financing of the budget deficit in 2019.
Among the Government expenditures,
Rs 1,456 billion has been allocated for recurrent expenditure of the public sector while a sum of Rs 856 billion allocated for capital expenditure.
The Government is to spend  Rs 1,000 billion for the salaries of  1.1 million public servants and 600,000 pensioners and an additional
Rs 220 billion is allocated to provide public welfare such as Samurdhi allowance, school uniforms, free medicine, allowances for the elders, fertilizer subsidy, a bag of nutritious food, payment for kidney patients and payments for the differently-abled.
Finance Minister Samaraweera has made allocations through the Appropriation Bill substantially to implement major development projects which bring direct benefits to the people of this country. These include road development, housing development, irrigation and drinking water supply development.
A sum of Rs 63 billion has been allocated for a series of development projects aimed at rural livelihood development programmes such as One Project for One Village Development Programme, Grama Shakthi, Gamperaliya and Pibidena Polonnaruwa.
A sum of Rs 175 billion has been allocated to develop highways and complete the Southern Expressway development up to Mattala; to develop and complete Colombo Outer Circular Road from Kadawatha to Kerawalapitiya and, construct the stretch of the Central Expressway from Kadawatha to Mirigama. This will also include the construction of the elevated Port Entry Road from Peliyagoda to Colombo International Financial City.
A further sum of Rs 75 billion has been allocated to complete middle and massive irrigation projects including the completion of the Uma Oya Multipurpose Development Project and Moragahakanda Development Project.
At the same time, the Government has identified various housing schemes to be launched throughout the country in 2019.

Accordingly, a sum of Rs 50 billion has been allocated for the relevant ministries which are responsible to launch these housing development projects. Among them are urban housing development projects to be built by the Megapolis and Western Development Ministry, housing projects implemented by the Housing Development Ministry, housing development projects in the North and the East and the Estate housing development projects. Simultaneously, a sum of Rs five billion has been allocated for the proposed Colombo Light Railway Transit System which has been earmarked to begin construction from the Peliyagoda New Bridge next year.
In addition, a sum of Rs 50 billion has been allocated to implement several water supply schemes including Jaffna Kilinochchi Water Supply System, Kelani River South Bank Water Supply Scheme and Matale Water Supply System. Extra funds have been allocated for the development of the railway and road transport sectors in order to upgrade the strategic city development.
The Budget will be presented in Parliament by Minister Samaraweera on 5 November 2018.
Jo to defeat budget
SLFP rebel group frontliner and former Minister S.B. Dissanayaka said that the Joint Opposition would pool all its power to defeat the Budget 2019 and form an Interim Government, until the General Election scheduled to be held  late 2019, with Mahinda Rajapaksa as Prime Minister under President Maithripala Sirisena.
He said that all progressive forces including members of the Tamil and Muslim political parties and a section of the UNP who are disappointed and dejected over the policies of the UNP and party leader would be invited to join the Interim Government.
The SLPP led by Mahinda Rajapaksa would be the leading party of the proposed Interim Government, he added.
Dissanayake also appeared confidant when pointed out that there was a risk of SLFP Members including Rajapaksa losing their parliamentary seat if they sought SLPP membership.
“It could be sorted out as the new Interim Government would be formed under President Sirisena with Rajapaksa as the Prime Minister. The main objective of forming an Interim Government is to save the country and nation from this calamity. The economy is in shatters.

Exports have been slowed. The Rupee is depreciating daily and prices of all commodities rising with no control. Not only the low income families but the lower middle class is also trying to make ends meet. We will try to put an end to this predicament faced by people and give them some relief. We have the full support for the Interim Government from the MEP led by Dinesh Gunawardena, Democratic Left Front led by Vasudeva Nanayakkara, National Freedom Front led by Wimal Weerawansa, Pivithuru Hela Urumaya led by Udaya Gammanpila, Ceylon Workers’ Congress led by Arumugam Thondaman and so many other Muslim and Tamil Parties,” he stressed.
Meanwhile, the United People’s Freedom Alliance (UPFA) led by President Maithripala Sirisena has appointed a committee to work out the steps to be taken to mitigate the current political and economic crises in Sri Lanka and submit a report in a week.
The UPFA Executive Committee met on Thursday (4). Its main constituent party is the SLFP.
Gunawardena, who attended the meeting, said that the committee comprised representatives from the UPFA allies. He said the alleged plot to assassinate President Sirisena and former Defence Secretary Gotabaya Rajapaksa was also discussed at the meeting.
“The committee will study how to conduct the elections to the Provincial Councils as early as possible along with other issues such as the economic crisis and the political crisis. It will report to the Executive Committee in a week,” the MP said.
Agriculture Minister Mahinda Amaraweera and Transport Minister Nimal Siripala de Silva represent the SLFP. The others are Ceylon Workers’ Congress leader Arumugam Thondaman, National Congress leader A.L.M. Athaullah, former Ministers S.B. Dissanayake and Susil Premajayantha.
IGP’s fate hangs in balance
The Inspector General of Police (IGP) has undermined his role and his immense responsibility to protect the peace of the country and has become a joke, President Maithripala Sirisena stated at the  weekly Cabinet meeting.
Expressing his disagreement with the actions of the IGP, the President has further directed the attention of the Cabinet towards this matter as he has stated that if the IGP’s actions were to continue in such a way, action should be taken against him.
It was reported that the President has stated that the IGP’s behaviour belittles the country as well as its leaders. Furthermore, the President has stated that he himself has been criticized due to this issue.
The President has also stated that he will take stern action in this connection, if the IGP does not stop his erratic behaviour.
It is of special note that the President has stated this in his first meeting with the Cabinet of Ministers after his arrival from attending the United Nations Summit.
During this instance, the Minister of Public Administration and Management, and Law and Order Ranjith Maddumabandara has stated that a comprehensive investigation will be launched into the IGP’s actions.
However, it was reported that several Sri Lanka Freedom Party Ministers have stated that the IGP would not put a stop to his unusual behaviour, even if an investigation is to be conducted.
It was also noted that the Ministers of the United National Party had not expressed any opinion against the IGP.
Meanwhile, Cabinet Spokesman Rajitha Senaratne said President Maithripala Sirisena would take a decision on Police Chief Pujith Jayasundara in the next few days unless he tendered resignation.
Minister Senaratne admitted that it was difficult for IGP Jayasundara to remain after President Sirisena expressed his displeasure over his behaviour in public and as the Police Chief.
Minister Senaratne said the IGP was appointed by the Constitutional Council and therefore, President did not have the power to fire him. He said but Members of Parliament could bring and pass an impeachment motion against him in Parliament and then the CC could fire him.
He admitted that President Sirisena berated IGP Jayasundara at the Cabinet meeting on Tuesday (2).
Interestingly, not a single Minister, including Minister of Law and Order Ranjith Maddumabandara under whom the Police Department runs, did not say anything against what President said on Police Chief, he said contrary to other reports.
“Jayasundara has been questioned last Friday (28) by a three-member Special Committee appointed to investigate allegations levelled against him that in 2008 that he accepted a bribe of Rs 12 million from a former Principal of Trinity College, Kandy,” he said.