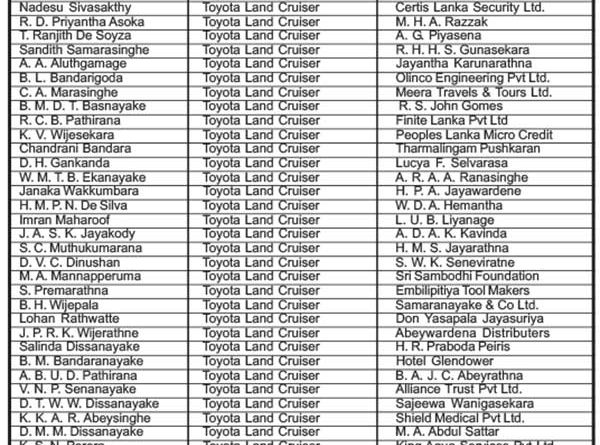 The Finance Ministry, yesterday, admitted that almost all lawmakers had imported vehicles on duty free permits issued to them following last parliamentary election in Aug 2015 therefore suspension of issuing of permits for a period of one year wouldn’t have an impact on parliamentarians.

The Island raised the issue with M. Ali Hassen, Director of Information, Finance and Mass Media Ministry, who issued a statement on Saturday as regards severe restrictions imposed on imports, including the importation of vehicles by lawmakers for a period of one year in a last ditch attempt to ease pressure on the rupee. Hassen said that permits wouldn’t be issued in case new members entered parliament in the event of death or due to resignation of National List MPs.

In addition to those who had been originally elected and appointed to parliament, Field Marshal Sarath Fonseka (National List), Piyasena Gamage (Galle District, in place of Geetha Kumarasinghe who lost

her seat as a result of a Supreme Court ruling) and SLMC and ACMC, too, appointed a member each through the UNP National List. All newcomers had received vehicle permits.

The Finance Ministry announced curbs on imports close on the heels of Finance and Mass Media Minister Mangala Samaraweera declaring at the Royal College he would stop importing of super luxury vehicles by members of parliament.

The Joint Opposition yesterday declared that nothing short of immediate change of government could save the national economy. Addressing the media at Vajirasharma temple, Borella, top JO spokesman on economic matters, Colombo District MP Bandula Gunawardena insisted that the Sirisena-Wickremesinghe coalition couldn’t overcome the current crisis by restricting imports.

Gunawardena said that restrictions on imports under any circumstances were contrary to the UNP-led government’s dossier on new trade policy submitted to parliament.

Asked by The Island whether he had seen the Finance Ministry statement issued on Saturday in respect of restrictions, MP Gunawardena claimed he didn’t.

Asked whether he felt the Finance and Media Ministry had deliberately deceived the public by declaring restrictions on lawmakers after the majority of them, including members of the JO sold super luxury vehicles imported on permits issued by the parliament, MP Gunawardena asserted that financial crisis couldn’t be resolved by denying duty free vehicles to MPs.

The Island said that lawmakers owed an explanation on whether they should be allowed to sell vehicles that had been imported with tax exemption amounting to Rs 30-33 mn each, Gunwardena said that he didn’t sell his vehicle.

The Island reminded the MP that the entire list of those lawmakers who had sold their vehicles and persons who bought them was available with The Island thanks to Right to Information query posed by attorney-at-law and public litigation activist Nagananda Kodituwakku.

Asked whether, he believed those elected at the next parliamentary election in 2020 should be deprived of such an exclusive privilege, MP Gunawardena said the decision on perks and privileges should be taken by political parties represented in parliament. The JO spokesman refrained from commenting on The Island observation that in spite of them objecting to the government, both parties take a common stand as far as the perks and privileges of elected representatives are concerned.

The current government over a year ago approved an additional Rs 100,000 each for members of parliament in addition to the monthly salaries and other perks. On top of all that a group of selected green eyed lawmakers numbering about 50 receive a monthly transport allowance amounting to Rs 200,000.

MP Gunawardena admitted that the Commission to Investigate Allegations of Bribery or Corruption (CIABOC) had authorized the transfer of vehicles imported by lawmakers using duty free permits.

Nagananda Kodituwakku said that a section of members of parliament had legally transferred vehicles imported by them; some refrained from transferring the vehicles to new owners.

Kodituwakku has moved the Supreme Court against the failure on the part of the CIABOC to prosecute lawmakers on the charge of defrauding the state of revenue amounting to Rs 7 bn.

The following is the latest list of those lawmakers who had transferred vehicles. The list was obtained under the RTI Law: