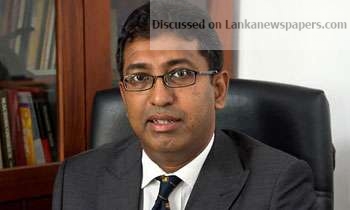 State Minister of National Policies and Economic Affairs Dr Harsha de Silva has pulled out from speaking at an Investors’ Forum to be held in at the London Stock Exchange on October 8, in a move to help cut the demand at the margin in the face of rapid rupee depreciation.

When contacted, the State Minister said he was supposed to speak at the London Stock Exchange next week on an Investors Forum.

“But I pulled out and declined to go because I wanted to do whatever I can, from my end, to help manage the current situation. There are other officials going and they can fill my void,” he said.

When asked about the Finance Ministry’s decision to take a number of temporarily measures to ease the pressure on the Sri Lankan rupee, he said this was what he also said in his recent Facebook post.

He said he simply requested those who can, to take temporarily measures to ease the situation and not to prevent measures altogether.

“Not only Sri Lanka, others countries have also taken such measure to deal with the temporarily situation. Even the US, when it was facing the financial meltdown some years ago, took measures on a temporarily basis. The US Government stepped in and in some cases, took over some of the private companies. Today, India has taken such measures, Malaysia too,” he said.

He commended Finance Minister Mangala Samaraweera for the temporarily steps he has taken instead of putting up taxes on the imports.

“Minister Samaraweera has balanced a difficult situation. We need to liberalize by removing para-tariffs and various non-tariff barriers. From the last year Budget, para-tariffs of about 1,000 items were removed and many more to be removed in this Budget. Instead of imposing these tariffs, what he has done is found a way to temporarily reduce the demand by bringing in measures which he can put and take off as soon as possible without upsetting the liberalization process. The key point is that the liberalization process continues. Given this temporarily sudden situation which has arisen due to external factors, the minister has decided to do this,” he said.

Meanwhile, he said he will push for his view on letting the overnight rate rise in order to deal with the situation.

“If we let the overnight rate rise at the Central Bank, there will be an across the board dampening of demand on imports. That also should come in now in order to deal with this temporarily. Our exports should be increased in order to come out of this issue. Because of falling exports and the inability to earn dollars to pay for our increasing imports, we have got into large foreign debts. Now we have to pay this US dollar debt for the next years, essentially due to the high cost payments of the international sovereign bonds issued by the previous government,” he said.

Commenting on the upcoming tourist season, Dr. De Silva said we should seize the opportunity to increase the influx of US dollars.

“In the very short term, the tourist season is coming up. Everybody is talking about Sri Lankan tourism. We have to expand services and we must take the opportunity to increase the expenditure of arriving tourists,” he said.