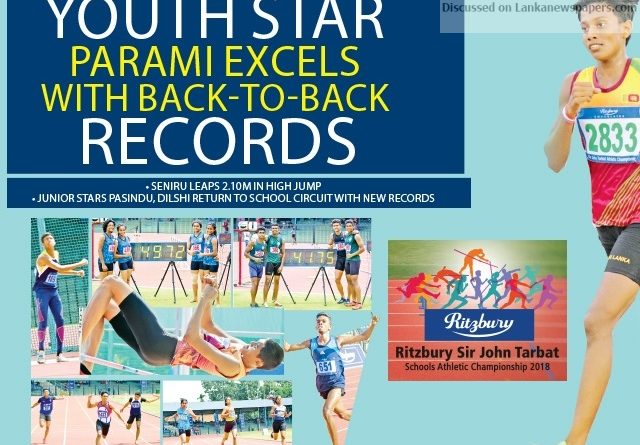 Youth star Parami Wasanthi Marisstella continued her record breaking run when she shattered her second distance meet record clocking 9 minutes 58.3 seconds in the 3000m at the Sir John Tarbet Athletic Championship at Sugathadasa Stadium yesterday.
A total of 12 records were set during the morning session to take the tally to 15.
Parami from Kuliyapitiya CC, the Asian Junior Gold medalist, clocked 6 minutes 37.9 seconds to win the 2000m steeple chase for girls under-18 on day one, and returned to the track early yesterday morning for another record breaking run in the 3000m. Wasanthi will fly to Argentina to participate in the Youth Olympic Games set to start in just two weeks time (6 October), where she will compete in the 2000m steeple chase, and is one of the favourites to win the event. By June she was the world’s number one ranked under-18 athlete for the event and is currently third in the world youth top list.
High Jumper Seniru Amarasinghe, who is also set to fly for the Youth Olympic Games, leapt 2.10m to set a new meet record in the under-18 boy’s high jump. Seniru, from Royal College Colombo, is ranked joint fourth in the world youth top list for the event.
In other events of the day, Dilshi Kumarasinghe, the triple medalist at the Asian Junior Championship, returned to the track after sitting the advance level exam and won the 800m race in a time of 2 minutes 12.67 seconds, 8 seconds slower than her personal best, but was still able to shatter the U-20 record.
Pasindu Kodikara, the Asian Junior 400m silver medalist and 4x400m relay team member, who finished fourth in the Asian Games, clocked 52.69m seconds in his pet event the 400m hurdle to set a new meet record in the boys U-20 event.
In the sprint events, three teams were able to shatter the 4x100m relay records at the meet – Royal College under-18 team (41.88 seconds), St. Benedict’s College under-20 team (41.73 seconds) and Gamini NC Bentota under-18 girl’s team (49.74 seconds) in their respective categories. Apart from Royal College, St.Peter’s College (42.14 seconds), St. Benedict’s College (42.53 seconds) and St. Joseph Vaz College (42.93 seconds) also clocked better times than the previous meet record for the event.
The day saw the 200m finals, where only one record was set, in the under-18 boy’s event by Ramesh Malshan of Maris Stella College, in a time of 21.92 seconds. St. Peter’s sprinter Hirusha Hashen won his second Gold medal of the meet winning the under 16-boy’s 200m with a time of 22.70 seconds, while Maris Stella sprinter Chanuka Sandeep won the under-20 boy’s 200m with a time of 21.91 seconds.
Gateway sprinter Shelinda Jansen won the girls under-18 200m with a time of 25.52 seconds, while St. Mary’s College Matara sprinter Ewanthi Emeshika won the under-20 girl’s 200m with a time of 25.74 seconds.
In the field events, discus thrower Rumesh Tharanga of St. Peter’s College won the boys under-16 event with a new meet record of 61.67m. Bishop’s College athlete Ovini Chandrasekara won the girls under-16 shot put with a throw of 13.15m, which was also a new meet record. The other record of the day was set by Lahiru Avishka of Senanayake NC Madampe clocking 1 minute 59.02 seconds to win the under-16 boy’s 800m.
St. Peter’s College leads the boys’ points table with 106, while Royal College (61) and Maris Stella College (60) are in second and third places. A. Rathnayaka CC Walala leads the girls’ points table with 124, with Gateway College Colombo (51) and Sumana BV Rathnapura (41) in second and third positions