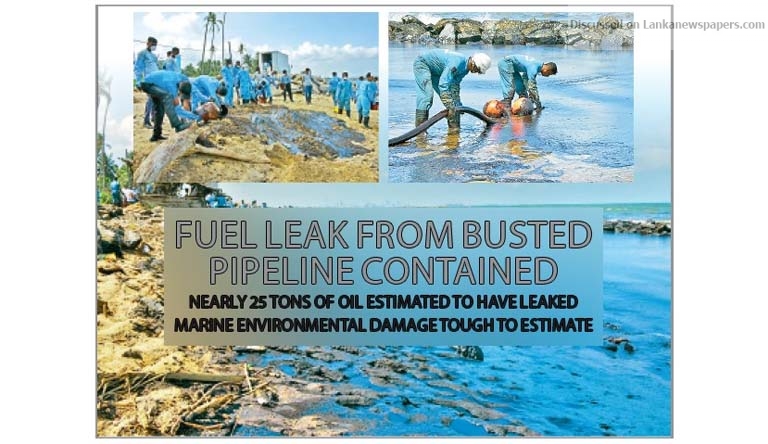 Preventive steps were taken yesterday (9) by the relevant authorities to repair a fuel leak on the pipeline carrying fuel from tankers to the Muthurajawela Petroleum Storage Terminal Ltd., (CPSTL), after it burst on Saturday (8) evening.
The leak was reported by the Ceylon Petroleum Corporation (CPC) to the Sri Lanka Navy (SLN), which deployed a special response team comprising over 300 Navy and Coast Guard officers to take pre-emptive measures to minimize the environmental impact.
Navy Spokesman Lieutenant Commander Dinesh Bandara, speaking to Ceylon Today, noted that due to the burst at the sea buoy pipeline, which transported fuel from offshore tankers to the Muthurajawela Terminal, a large oil spill was observed in the sea and coast area of Thaldiyawatte in Uswetakeiyawa, to Pamunugam, Ja- Ela and in Dikowita.
The Marine Environment Protection Authority (MEPA), the sole institution responsible of minimizing the impact on the environment in events such as this, was also called into assist the SLN and CPC officers. Chairperson of MEPA, Rear Admiral (Rtd) Rohana Perera said that nearly 25-30 tons of oil is estimated to have leaked during the incident. He noted that due to the amount of oil, it will take at least three days to conclude the cleanup operations.  This was the second time an oil spill occurred due to technical malfunctions at the Muthurajawela CPSTL. The first leak occurred in December 2015. It created a large oil spill in the Muthurajawela lagoon.
He further noted that the marine environmental damage caused by the incident cannot be estimated. MEPA is currently awaiting an incident report from the CPSTL.
Meanwhile, the CPC reported that immediate action was taken to stop the leakage. However, it was noted that further repairs to the buoy, which requires technical assistance and divers, will take at least two-three days. It was also noted that the cause of the breakage is yet to be ascertained.