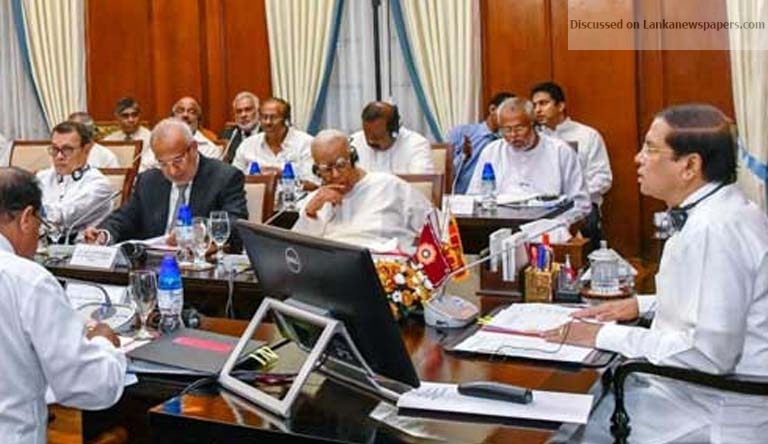 President Maithripala Sirisena says there is no differentiation or discrimination in the development of the country and the responsibility of delivering development benefits for the people living in the Northern and Eastern provinces will be fulfilled.

The President further said that the assistance of the all the people’s representatives in the province as well as the public servants is expected in this regard, reported President’s media Division. He made these remarks when the Presidential Task Force on the development of the Northern and Eastern Provinces met for the second time at the Presidential Secretariat, yesterday (27).

During this meeting, the President instructed the officials to take measures to streamline and accelerate the infrastructure development programmes of the North and the East and the programmes implemented to uplift the livelihood of the people.

This first meeting of the Presidential Task Force on the development of the Northern and Eastern Provinces was held under the patronage of President Maithripala Sirisena at the Presidential Secretariat last July, 30 and the President also inquired into the progress of the implementation of the decisions taken during this meeting.

The progress of the programme implemented to supply drinking water for the Madhu sacred area in Mannar District was inquired by the President and it was said that the Sri Lanka Navy carrying out those constrictions works.

The development activities of Kankasanthurai Cement Factory, developing Walachchena paper industry, developing the salterns of Elephant pass and Kurunchayiniu, developing the industrial colony, and finalizing the project, which is conducted to strengthen the industries with low performance and reactivating them were also finalized.

Moreover, the increasing of drug traffics and violence issues in the Northern Province were also discussed and the President requested the Inspector –General of Police to make the program to eliminate the issue regarding drugs more efficient.

The Tri Forces have agreed to build houses, supply water, sanitary and other applicable infrastructure and those programs were also properly monitored.

All the line Ministries were informed to provide a list of chief strategic list of the projects of Northern and Eastern Provinces and the President invited all the public representatives of the province to present suggestions in relation to the development of those areas.

Thus the representatives presented their suggestions.