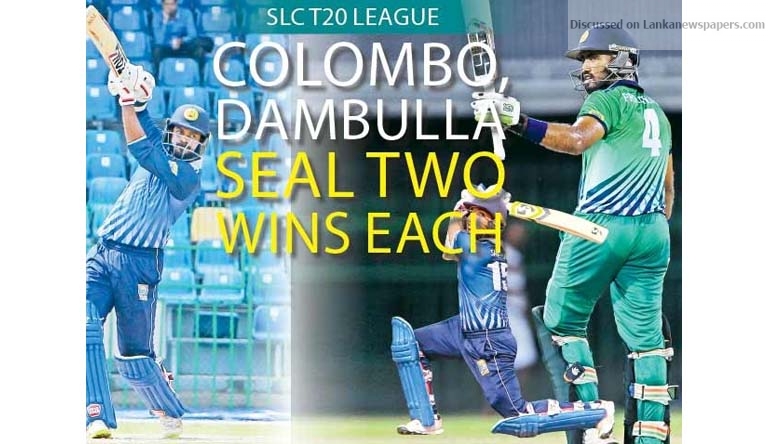 Colombo and Dambulla remained unbeaten in the SLC T20 League after two wins in two games, with their batsmen dominating.
Dambulla who won their last game against Galle by a margin of 95 runs, took the top spot on the points table with a net run-rate of 2.825, while the second placed Colombo team, though tied on points, has a lesser net run-rate of 2.25.
Dambulla defeated Kandy by 18 runs in their first game which gave them confidence to come up with an even better performance against Galle in the second match.
Middle order batsman Ashan Priyanjan has been in top form for Dambulla scoring a century and a half century in the two games. Priyanjan made 108 against Kandy and 57 against Galle and ended up being their top scorer.

Priyanjan, who has already represented Sri Lanka, will look to regain his spot in the limited overs with this performance.
After a series of off field issues he has had in recent times, Dhanushka Gunathilake is also slowly proving a point by silencing his critics, especially with the ball, taking five wickets for 42 runs in 8 overs. Although making 39 runs with the bat against Kandy, Gunathilake needs to improve on that aspect.
Leg spinner Wanidu Hasaranga has also been in good form taking 3 wickets for just 11 runs against Galle in the last match. Colombo occupies second place on the points table winning a dramatic game against Kandy, which was tied even after the super over. Colombo was awarded the win as they had lost fewer wickets.
Opener Upul Tharanga is in great form. Having scored 124 against Galle he carried that form into the Kandy match with a sound 62. Tharanga failed to score big runs against South Africa in the recently concluded limited over series but has come back to form with plenty of runs under his belt for Colombo.
Shehan Jayasuriya has also been able to show his all round abilities during this tournament, excelling with both bat and ball. Jayasuriya struck 63 runs in the second match against Kandy while picking up 3 wickets for just 22 runs, making a clarion call to all concerned of his all round abilities. Leg spinner Jeewan Mendis also helped Colombo immensely with his bowling, taking 2 wickets for 13 runs against Kandy, while claiming one wicket against Galle conceding just 19 runs in four overs.
All rounder Asela Gunarathne has not done well for Galle with bat or ball, which is a bad sign for Sri Lanka as well. Kandy, though unable to win a match so far, showed a lot of character during their losses. Thikshila de Silva in particular gave them good starts, while Lahiru Thirimanne was seen getting back to form.