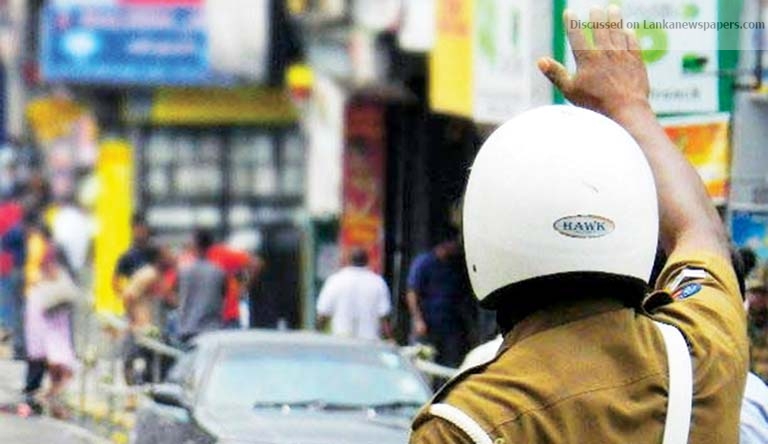 Transport and Civil Aviation Minister Nimal Siripala de Silva stated yesterday that the new fines aimed at reducing road accidents will not be changed or removed under any circumstances.

Briefing the media in Colombo yesterday, Minister de Silva said that the traffic fines were amended after 13 years, along with the introduction of several new categories of traffic offences. Even though the new fines were effective from January this year, several bus unions are opposing them only now.

The Minister said that all road users need to maintain discipline and those who wish to get the new fines revoked actually want to escape punishment after committing traffic offences. “There will be no fines for anyone if the road rules are followed,” he pointed out.

“We gave a time period for private bus associations to submit their objections. Most of them agreed with the new traffic rules. After it has become a law of the land, no one can raise objections. It is not possible to change any Act after being passed in Parliament,” he said.

The strike which was launched on Wednesday by a certain private bus association against the new traffic fines is completely unsuccessful, he added. “We are ready to face any strike launched by any bus or railway trade union. It is only the bus crew who are involved in the strike and not the bus owners. It is reported that the strike is being held in only two provinces. If the private bus strike causes further inconvenience to commuters at rush hour, we will deploy the Army to run the buses,” he added.

Meanwhile, ACPBWA Co-Convener U.K. Renuka said the strike action was successful. He said only 20 per cent of the private buses were operated, mostly by bus owners themselves.

Meanwhile, Education Minister Akila Viraj Kariyawasam yesterday thanked the private bus operators including drivers and conductors who did not join in the bus strike yesterday, because of the ongoing Advanced Level examination.

“We are ready to give an ear to the grievances of trade unions who are working for the betterment of the country,” Kariyasam said. The Minister was of the view that the trade unions are trying to gain a political mileage by launching sudden wild cat strikes causing inconvenience to the public.

“Certain groups have become a cat’s paw of bankcrupt politicians,” he said.