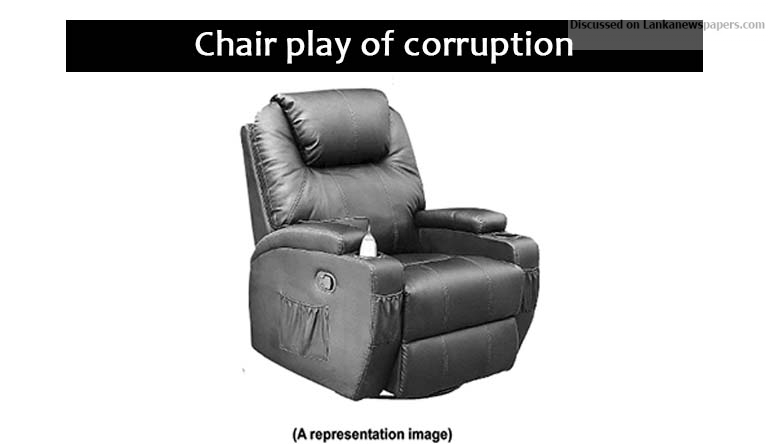 Leaders of people must occupy seats of power no doubt. These seats literally and metaphorically have to be simple, inexpensive, strong, humble, modest, and endowed with humility. These seats need not be grand, exorbitant, exotic, egoistic and corrupting. The chairs that our politicians like seem to be of the latter variety. The Western Provincial Council has ordered from a foreign country hundred-odd chairs for its members, each costing Rs. 650,000/-. When this outrageous and callous disregard for the inviolability and accountability of public funds was questioned, the Chief Minister audaciously defended the indefensible.

What else could you expect from this lot who are bent on grabbing everything possible before the ship sinks? Isn’t everybody from top to bottom doing that while the going is good, which they think may not last very long? Are these chairs gold plated? Don’t these politicians have any feeling for those who voted them into power, the poor people who are being taxed to pay for those chairs? How could they think of importing chairs, of all things, spending millions while the poor are burdened with high cost of living, and more and more taxes? Don’t they make chairs in Sri Lanka? Importing hundred chairs from abroad at Rs.650000/- each would have been a comedy, if it were not such a tragedy with the economy of the country in such pathetic state, and every citizen in debt by huge amounts due to the injudicious desperate borrowing necessitating the sale of national assets.

The stage was set for this type of scam with the Central Bank robbery carried out soon after these people came to occupy their ministerial chairs. That double blow was followed by several similar high-octane heists involving coal, highways, agricultural rentals, old ships, etc. They are together trying to increase their own salaries by 215%. One minister has said he is getting a total salary of about Rs. 300,000/- which he said is hardly enough to meet his expenses. They get duty free super luxury vehicle permits that no other person in this country gets. They give ludicrous reasons such as backache for asking for such super luxury vehicles, and sell the permits making large amounts of money. And, they call themselves servants of the people.

Some time ago, we had a president who got himself a chair, which was more opulent and grand than the chairs occupied by ancient kings. The chairs used by members of the parliament are of a special type designed to give maximum comfort, though they are hardly used, for the parliament is often adjourned due to lack of a quorum. The Chief Minister of the WPC says they had ordered similar chairs for their comfort. Did those empty parliament chairs cost as much one wonders? All PCs are white elephants and don’t seem to be doing any useful work, except engage in all kinds of rackets and add to the red tape that people have to go through to get problems they face sorted out.

This contemptible act of the WPC is a reflection of the attitude, motives, agenda, callousness, impunity and desire for self-aggrandizement of the so-called “yahapalana” government. They seem to have forgotten their primary responsibility towards the people who had voted them into power. What are we to do but grin and bear it?