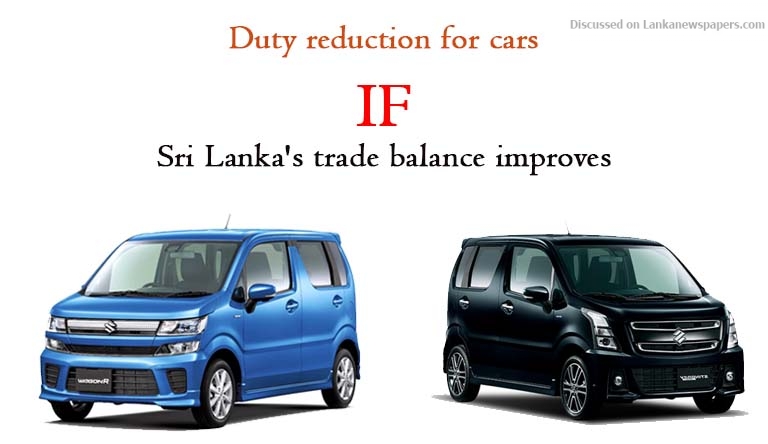 Both Samaraweera and Central Bank Governor Indrajit Coomaraswamy have maintained that the higher tax slapped from August 1 was not intended to raise more revenue, but to discourage imports, save foreign exchange and ease pressure on the rupee.

Analysts have pointed out that problems of the rupee, which started shortly after are the central bank was set up in 1951, are due to liquidity injections (printing money) made by the monetary authority to keep interest rates down.

Sri Lanka’s trade deficit will widen as the economy picks up, more foreign investments come in, tourism earnings go up and the government borrows abroad to fund domestic spending even if money is not printed, analysts say.

Prime Minister Ranil Wickremesinghe told parliament last week that the small car taxes were a temporary measure and he hoped the trade balance would improve by the end of the year.

“Car duties can be brought back to what they were before August 1 or even reduced further, especially for the mid-size cars below 1,500 cc category,” an official source said.

He said the 2019 budget could have more measures to buttress Minister Samarawera’s “green, clean” vehicle policy of encouraging electric and hybrid vehicles.

Moves to discourage diesel use are also expected with a total ban on the import of diesel powered vehicles for private use.

Urban Development minister Champika Ranawaka had a similar ban on highly polluting two-stroke gasoline engines when he was tin charge of the Environmental portfolio.

He resisted he powerful three-wheel importer and taxi lobby and banned all two-stroke engine vehicles, including motorcycles to reduce pollution on Sri Lankan roads. The ban went into effect 10 years ago.

Neighbouring countries have banned the use of diesel for public transport and carried out a successful program to convert diesel vehicles to much cleaner LNG. New Delhi also bans diesel cars over 10 years entering main cities as a means of tackling pollution.

“There would be a re-think on the use of diesel,” the official source said adding that a complete re-think of the country’s energy policy should be undertaken.

Despite the duty on a small Suzuki Wagon R going up by as much as 425,000 rupees, there was no marked increase in retail prices at local car dealerships in the past week. Several dealers with large fleets of cars in stock took out advertisements last Sunday saying that they were still selling at the old price.

“This is a very price sensitive segment of the market. If we raise the price, we will not be able to move our stocks,” a dealer at Mount Lavinia said adding that he did not notice a spike in demand even at the old price.

Car sales on internet portals also showed that there had been no upward adjustment of prices as demand remained sluggish. Dealers had imported large fleets of cars anticipating a tax increase in November.

The Central Bank of Sri Lanka officials said there was a foreign exchange outflow of 195 million dollars to import cars below 1,000 cc engine capacity in the first five months of this year, dramatically up from 26 million dollars spent in the corresponding period last year.