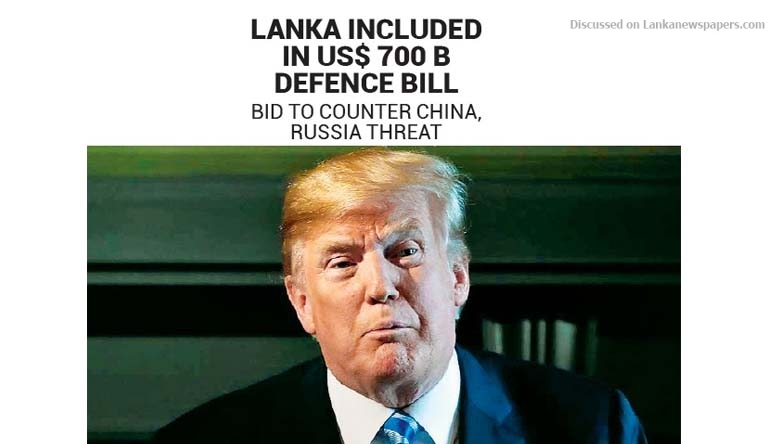 US President Donald Trump is set to sign a more than US$ 700 billion Defence Bill for the fiscal year 2019 today, giving big increases to the US military to counter the White House’s calls for greater competition, specifically with China and Russia.
A week after approval from the House of Representatives, the US Senate passed the US$ 716 billion National Defence Authorization Act (NDAA) on 2 August, backing Trump’s call for a bigger and stronger military.

In action largely targeting China, the NDAA planned a series of measures that prohibits China from Rim of the Pacific exercises to strengthen military relations with Taiwan order public report on Chinas activities in the South China Sea ban US Defence Department use of Huawei or ZTE equipment reform foreign investment rules to address national security and cut funding for Chinese language programmes at universities that house Confucius Institutes.
The policy Bill said it would add another aircraft carrier to the US fleet, and in total 46 new ships would be planned for the US Navy over the next five years.
The US focus on China as a ‘strategic competitor’ comes as the US armed forces are downgrading the fight against terrorism and focusing more on Asia Pacific.
The defence Act also aimed to provide more money to forge closer defence relationships with other nations like India and Sri Lanka. This year saw the first visit of a US aircraft carrier to Vietnam since the end of the Vietnam War.
“It’s not simply authorizing more planes and ships to be built, which it does, but it also directs reporting requirements on issues on influence operations and espionage,” he said. China is not alone; Russia too is also targeted in the Policy Bill.