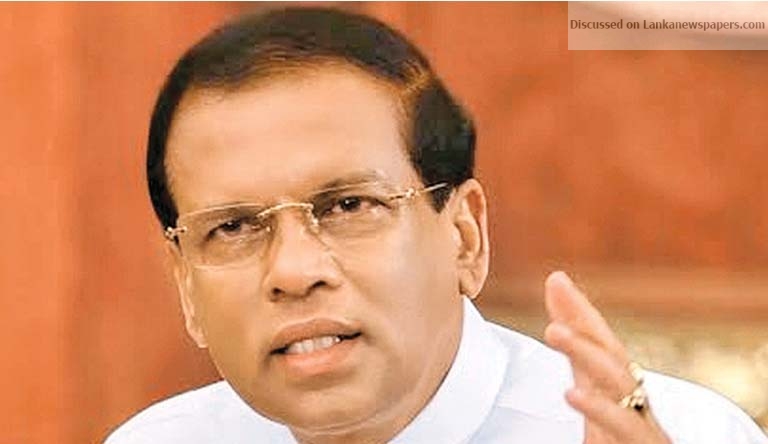 Public inconvenienced the most:

Groups which resort to wild cat strikes to win over their rights should also think about the rights of the public in a humane manner. It is not the government but the innocent public at large who are inconvenienced by these strikes, President Maithripala Sirisena said.

He made this observation participating in a ceremony at the Viharamahadevi Park, Colombo yesterday morning.

The President who said that it was the innocent poor rather than the wealthy who mostly benefit by public transport and free health services, said that he regretted the grave inconvenience faced by the public, including Advanced Level students, due to the sudden work stoppage of railway employees.

The President said anyone has the opportunity to settle issues through discussions with the government.

President Sirisena also emphasised that unlike during the past regime, his government had never used guns or bayonets against strikers or protestors, as such he would request railway employees, doctors and other professional groups planning strikes to try and resolve their problems in an intelligent and humane manner without inconveniencing the public.

The plants are supplied by the Sri Lanka Ayurvedic Drugs Corporation.

A press release by the President’s Media Unit said this new programme has been launched as one step in the march towards sustainable development.

President Sirisena further said dedication, contribution and honesty on the part of all sections of society was essential to usher in a national re-awakening. The Government was working on a set plan to increase the present 28 percent forest density to 32 percent, and programmes of this nature would stand in good stead to achieve that target.

As much as the drive to increase forest density, the government would launch a major battle to eradicate the drug menace with the help of the Armed Forces and society in general.

The President also reiterated that the death sentence would be implemented to the letter against convicted prisoners continuing the drug racket from their prison cells. This measure would be taken for the future benefit of the country and nation. The President launched the project by handing over the first medicinal plant to Army Commander Lt. Gen. Mahesh Senanayake and thereafter planting a sandalwood sapling at the Viharamahadevi Park.