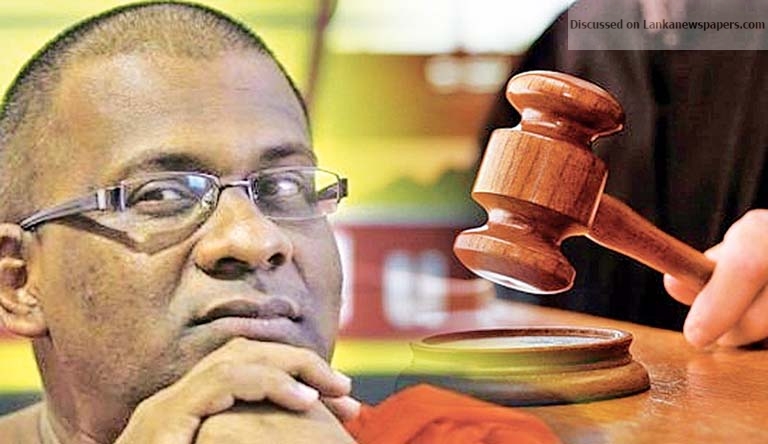 The Court of Appeal yesterday found Bodu Bala Sena (BBS) General Secretary Ven. Galagoda Atte Gnanasara Thera guilty on all four charges and sentenced to 19-year-rigorous imprisonment, to be served concurrently within 6 years, over his contemptuous behaviour inside the Homagama Magistrate’s Court on January 25, 2016.

While handing out a 56-page judgement, Court of Appeal President Justice Preethi Padman Surasena and Justice Shiran Goonaratne observed that the ingredients of all four charges framed against Gnanasara thera has been proved beyond reasonable doubt. The Court of Appeal ruled that the conduct of the accused before the Magistrate is a contemptuous conduct which calls for punishment in terms of Article 105(3) of the Constitution.

The Court of Appeal finds the presumption made by court at the inception about the innocence of the accused, now stands rebutted beyond reasonable doubt.

Justice Surasena stated that court has held that the accused had made the utterances in court deliberately on his own volition, without any permission either expressed or implied from the Magistrate.

‘’There is overwhelming evidence before this court, which has proved beyond reasonable doubt that the conduct of the accused before the Magistrate had been with the deliberate intention to intimidate the Magistrate in order to obtain an order he had desired. The presence of the accused is not accidental or random but a deliberate and a planned presence calculated to somehow obtain the order desired by him, mainly bail for the suspects,’’ the judgment said.

“The accused has not tendered any apology to court either in the Magistrate’s Court or in this court. Instead he has taken high ground that his actions were well within the law. The legislature had intended to vest the Court of Appeal with wide powers to punish for contempt of other courts and tribunals.

Thus, it is the fervent duty of this court to ensure that all courts and tribunals of this country are free from all forms of intimidation and undue influences to enable their smooth functioning towards administering justice according to the law of the country,”Justice Surasena further added.

Four charges had been framed against Gnanasara Thera.The accused, on or about 2016/01/25 at the Magistrate of Homagama without having any lawful connection to, or without being any party to proceedings before that court deliberately and intentionally addressed the court without obtaining any permission thereto, and obstructed the proceedings in court, challenged the authority of court, disrespected the authority of court and conducted himself in a manner prejudicial to the power and authority of court to administer justice and thereby committed offence under Article 105 of the Constitution.

During the inquiry, the accused pleaded not guilty to all charges. According to evidence, the thera had referred to Dileepa Peiris as an impotent State Counsel in abusive language and directed him to sit.

Former Homagama Magistrate Ranga Dissanayake had referred this Contempt of Court action to the Court of Appeal since it is vested with powers to inquire into such a complaint.

At a previous occasion, the Attorney General filed the amended charge sheet comprising four counts alleging that the accused had committed a punishable offence which comes under Article 105 of the Constitution.

On January 25, 2016 Ven. Galagoda Atte Gnanasara Thera began to address Open Court after the court hearing pertaining to the disappearance of journalist Prageeth Ekneligoda was over. The Thera was arrested by police on the charges of contempt of courts, obstructing Court proceedings and intimidating a public servant.

Gnanasara Thera was not present in Court and Court was informed that he was receiving treatment at the Sri Jayawardhanapura Hospital for a kidney ailment.

The Court of Appeal yesterday rejected a request made by President’s Counsel Manohara de Silva that Gnanasara Thera not be transferred to the Welikada prison, until the decision regarding the appeal is made.

Gnanasara Thera was sentenced to six months rigorous imprisonment after he was found guilty for threatening and intimidating Sandhya Ekneligoda, the wife of missing journalist Prageeth Ekneligoda. (LS)