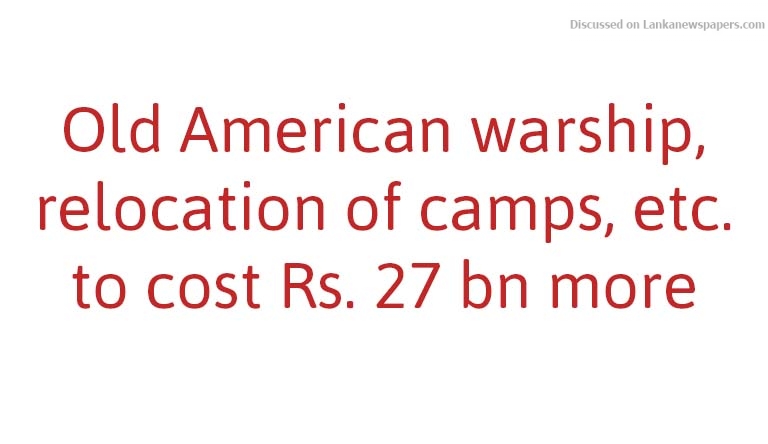 The government yesterday submitted a supplementary estimate of more than 27 billion rupees for the approval of parliament to cover its expenses exceeding the budgetary allocation.

The total amount of the estimate was Rs 27,176,528,965 and of that amount Rs 15,594,213,000 has been to cover the recurrent expenses the government incurred in addition to its budgetary allocations.

The estimate was presented to Parliament by Chief Government Whip Gayantha Karunathilake.

Among the approvals sought are for a sum of Rs 100,000,000 to meet the expenditure of relocating the army camps in the Northern and Eastern provinces, a sum of Rs 2,165,600,000 to cover the expenses in acquiring 50 year old High Endurance Coast Guard Cutter from the USA for Sri Lanka Navy, and the Department of Buddhist Affairs has sought a sum of Rs 5,000,000 to settle the cost incurred on conducting the funerals of the late Most Ven Bellanwila Wimalarathana Thera and Girambe Ananda Thera under state patronage.

The Ministry of Social Welfare and Primary Industries has sought an additional sum of Rs 21,000,500 to meet expenses of domestic and foreign travel, supplies, maintenance and other services of Deputy Minister’s office, to pay salaries of the staff of deputy minister and acquiring assets for the deputy minister’s office. The Ministry of Defence has asked for a sum of Rs 7,250,000 to meet the expenses of acquiring vehicles. Ministry of Ports and Shipping has asked for Rs 853,734,040 to meet the expenditure of fulfillment of conditions precedent to the Concession Agreement for Port of Hambantota as per the Cabinet decision dated June 12.

The Department of Muslim Religious and Cultural Affairs has sought a sum of Rs 121,000,000 to settle outstanding payments related to supply of dates to the Muslim community through mosques.

The Ministry of Buddhasasana has sought a sum of Rs 105,000,000 to cover expenses of renovation of places of worship damaged due to an earthquake in Nepal.

Supplementary allocations are provided strictly for the purposes specified in approved budget estimates to relevant spending agencies having carried out a need assessment, giving consideration to relevant financial regulations, and approved procedures.

However, this supplementary provision does not change the approved total expenditure limits of the annual estimate by Parliament. The allocation of such purposes has been made under the project of budgetary support services and contingent liabilities of the Department of National Budget and it is under the limit of the approved annual budget.

Therefore, either the burrowing limit or the maximum limit of total expenditure will not be increased due to granting of these supplementary provisions, a note attached to the estimate said.