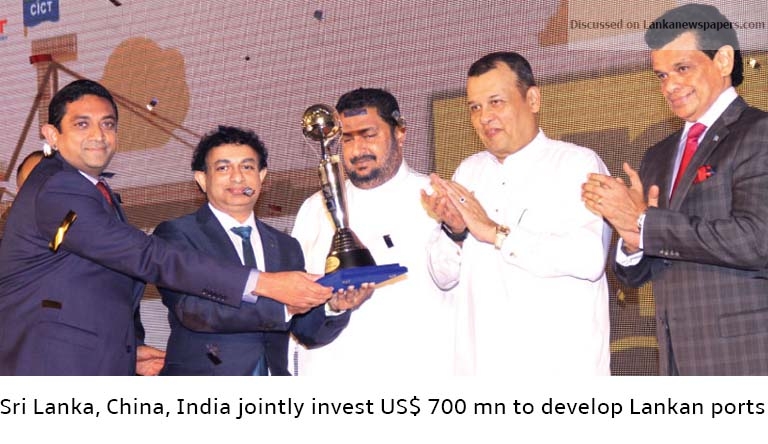 Sri Lanka Ports Authority (SLPA), China and India are jointly investing over US$ 700 million to develop three key ports in Sri Lanka in the next three years.

Minister of Ports and Shipping Mahinda Samarasinghe said that China would invest between US$ 400 to 600 million to commence the third phase of the Hambantota Development project. The project will commence at the end of the year and would be completed in three years.”

Speaking at the first SLPA, JCT, SAGT and CICT jointly organized ‘Port of Colombo Awards Night’ in Colombo on Monday he said besides, the Indian government has pledged US$ 40 million to upgrade the Kankesanthurai Port. “This development project is now in the process and would be completed early next year.” He said that the Treasury has received the total lease payment of US$ 974 million for Hambantota port project from the Chinese counterparts and China has already invested US$ 146 million for the development work in the Hambantota Port. The Minister said that a lot of planning and talking had been going on to develop the East Container Terminal (ECT) and finally the SLPA has decided to invest US$ 100 million to construct it. “The SLPA has a record Rs. 13.3 billion profit last year and we will invest this money for the development of ECT as delaying this project would cost more money to SLPA. We will also redevelop the West Container Terminal in Colombo and a feasibility study will begin soon.”

According to internationally recognized global ranking indices, the Port of Colombo is positioned as the world’s 23rd best container port and the 13th best connectivity port in the world at present and we want to further improve on this.

He also said that after taking over the Shipping Ministry there is harmony in the Port of Colombo and there is no industrial action (strikes) as he constantly has a dialogue with the trade unions. “We will also add more infrastructure facilities to the Colombo Port to offer better facilities to cruise liners and work with the travel sector to promote Sri Lanka’s cruise liner business.”

Plans are also underway to convert Galle Harbour as a tourism port and EOI for this would be called soon. The Minister also disclosed that they are waiting for the master plan of the Trincomalee development plan to commence work on the Trincomalee harbour where the SLPA owns over 500 hectares of land which is to be given for development as a PPP project.

The Minister said that they are also working with the Asian Development Bank to formulate a long term maritime master plan for Sri Lanka and this would be presented to Cabinet this year.