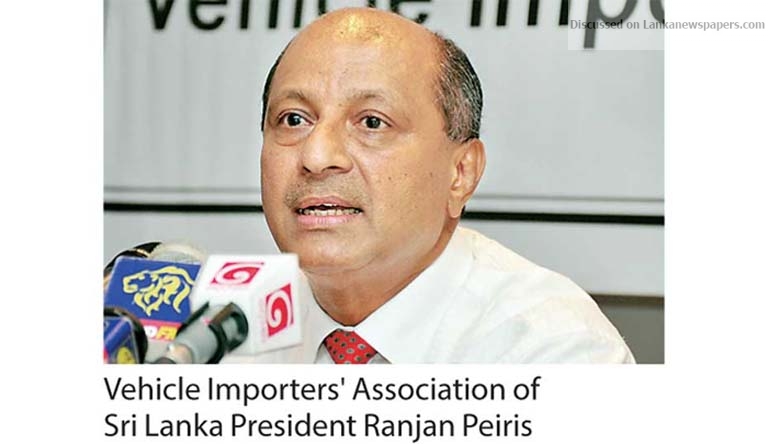 However, importing such standard vehicles will not result in a major price difference between such vehicles and others that are below this standard,  Vehicle Importers Association of Sri Lanka (VIASL)  president Ranjan Peiris said at a media conference in Colombo last week.

The VIASL recently called on the authorities to remove the current monopoly enjoyed by franchise dealers in bidding for government tenders, while issuing a clarion call urging the authorities to consider a series of concerns detrimental to the industry.

Peiris said that the regulations relating to Euro Four standard vehicles, that are environmentally friendly and equipped with certain safety standards, are an excellent move to introduce some order to Sri Lankan vehicle imports.Further, VIASL also  pointed out that some agents had an unfair advantage as new vehicles imported by parallel importers did not receive the applicable ‘brand new’ status despite the vehicles not being previously used, which is a detrimental qualification for VIASL members pitching for government tenders.

“Removing the monopoly enjoyed by agents in bidding for tenders is on the cards for the 2019 budget proposals,”  Peiris said

He said that they urged the authorities to consider this matter not just because these agents enjoy a tender monopoly but because the government was being forced to purchase certain vehicles at a higher price resulting in the wastage of public money.

Stating that there were around 20 franchise dealers in the industry that the government had to rely on for tenders, Peiris said,

“If  the monopoly was eliminated there were over 1,500 parallel importers to get down good quality vehicles at competitive prices.”

Noting that many of the practical proposals submitted by VIASL got a noteworthy response from the government, such as introducing relevant safety features and emission standards, the Association expects the authorities to heed their concerns.

“We had a preliminary meeting last week with the Finance Ministry and they are now in the process of setting up a special committee comprising the Central Bank, Treasury and Customs. This year we want to understand the government’s concerns and submit our proposals accordingly. The Central Bank wants to control the dollar outflow and we want to support them, not go against them or look at our business. We are hoping to submit our budget proposals by next month,” he added.

“We have informed the authorities to consider permitting a ‘brand new status’ for zero mileage vehicles because we get down brand new vehicles. It is well-known by the Customs as well as the Registrar of Motor Vehicles (RMV). They can physically check and we have all the mechanisms to verify. However, certain people don’t want to do it because they want to have the entire supply of vehicles to the government,” Peiris added.

With the depreciation table being abolished, he said, traders who import vehicles which are up to three years old are also required to pay the same tax as that imposed on brand new vehicles. Thus, the Association called on the authorities to urgently look into this matter.

He refuted claims by franchise dealers that VIASL members were paying reduced taxes for the brand new vehicles imported. Highlighting that the tax on a vehicle is based on the engine capacity, he clarified that the parallel importers register or deregister them due to the export regulations of relevant countries.

Peiris also said that the engine capacity tax was mainly instituted by the Finance Ministry with a view to prevent errors in calculating import tax based on valuation and to prevent any revenue leakage from government coffers.