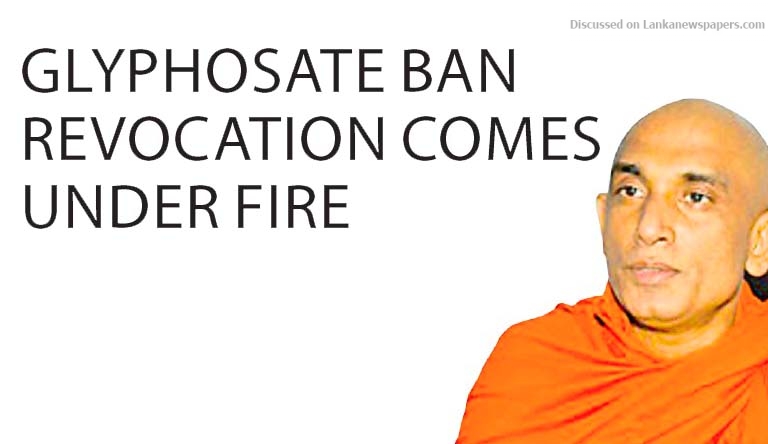 The Joint Opposition (JO) and Parliamentarian Ven. Athuraliye Rathana Thera yesterday (17), demanded that the Government reveal its true stance on the glyphosate ban.
JO Parliamentary Group Leader Dinesh Gunawardena, making a special statement during the Parliamentary sitting, stressed that while the Government imposes a ban and an official revokes it, subsequently the Ministers go on telling people that the ban is still on. “These actions are jokes. This glyphosate fiasco has disrupted public order and placed lives in danger. What is your stand? Where do you stand with regard to the glyphosate ban?” Gunawardena queried.
Elaborating further, he said, “The Cabinet banned glyphosate following reports that it could cause kidney ailments. In a situation like this, a Gazette was issued to lift the ban with effect from 14 July. It is reported in the media that the lifting of the ban came without prior approval of the Cabinet. This is a serious issue. What is this Government doing? Don’t they have any sense?
“The Government did not issue the particular Gazette pertaining to removing the ban to the Parliament. In addition to the ban on glyphosate, the Gazette also has removed the bans on Cholopyrifos and Carbofuran,” he noted and added, “The Government should have submitted the Gazette to the Parliament. We heard that the ban was revoked as per the wishes of a few officials. Could officials take such decisions without informing it to the Cabinet? What does the Government have to say about this?”
Replying to Gunawardena, Leader of the House and Minister Lakshman Kiriella said that the Government could present an extended report on the issue to the Parliament. He said that, “The relevant Minister would respond to this question. He would give a detailed response as you requested. For the time being, can you say whether you are for or against the ban on glyphosate? A simple answer would be enough.”
Gunawardena: “I’m not like your Government. I don’t sway like you. I favour the ban. That is my stance on the matter.”
Kiriella: “Your Government imported cheap and low quality fertilizer for 20 years and made people sick.”
United National Party MP Mujibur Rahman: “The Government Medical Officers’ Association (GMOA) in a statement on the glyphosate ban has called for urine samples of MPs. Have they made such a request?”
Speaker Karu Jayasuriya: “I haven’t received any request as such.”
At this juncture, Rathana Thera also participated in the discussion.
He said that, “It was said earlier that the glyphosate ban would be lifted only for tea and rubber. But the new Gazette says that the bans on three chemical pesticides have been lifted. Many countries around the world have banned them. There are more than 1,000 cases pending in the United States Courts against them. Apart from that the relevant Gazette has not been submitted to the Parliament. Why is that? We cannot find this Gazette.”
Speaker Jayasuriya: “It is only the most important Gazettes that are given to the MPs by the Parliament, not every Gazette. But I would look into your request.”