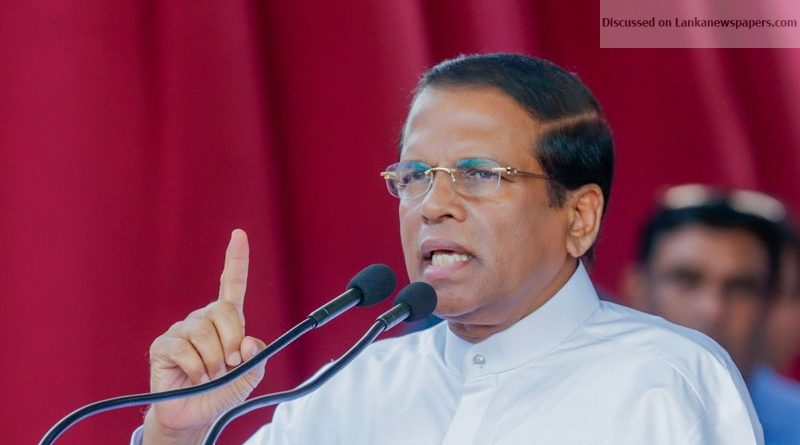 Convicted drug lords trafficking from prisons to be hanged.

President Maithripala Sirisena said he will use his powers to place his signature to execute the death sentence on traffickers sentenced to death for drug offences.

This will be enforced on convicts who continue to operate the drug racket from their prison cells.

“Although there are conflicting views about the death sentence in our Buddhist society in particular, if a society which listened and preached an overdose of religious discourses is going on the wrong direction, timely decisions should be taken to bring this menace under control,” the President said.

The President said this participating in the inaugural ceremony of the Mathata Erehiwa Pasalen Javayak (thrust against drugs from the school) programme held at the Getambe playground in Kandy last morning.

This programme is conducted countrywide jointly by the Education Ministry and the Presidential Task Force on Drug Prevention concurrent to the National Drug Control Programme.

The President said whatever opponents said there had been a drastic reduction in crime and women abuse in the country during the last three and a half years. Referring to the crime statistics report for the last 10 years since 2008 submitted to the National Security Council yesterday, the President said bogus and cooked up reports in certain sections of the media about an increase in crime since the advent of this government were being used and dangled by certain sections to achieve petty political gain.

Drugs and certain social websites had been a main factor contributing towards an increase in killings and sexual abuse of women.

The government as well as parents should devote their main attention towards protecting children from this situation. During the programme aimed to build a good country free of liquor and drugs, an awareness should be made among schoolchildren to make them the prime messengers in society. The President also distributed awards and mementos among state officials who made a special contribution towards the National Drug Prevention programme in appreciation of the services rendered by them. The President also handed over a Rs 2 million grant to Peradeniya University Vice Chancellor Prof. Upul Dissanayake as a contribution towards the Peradeniya University Medical Faculty Oral Cancer Unit.