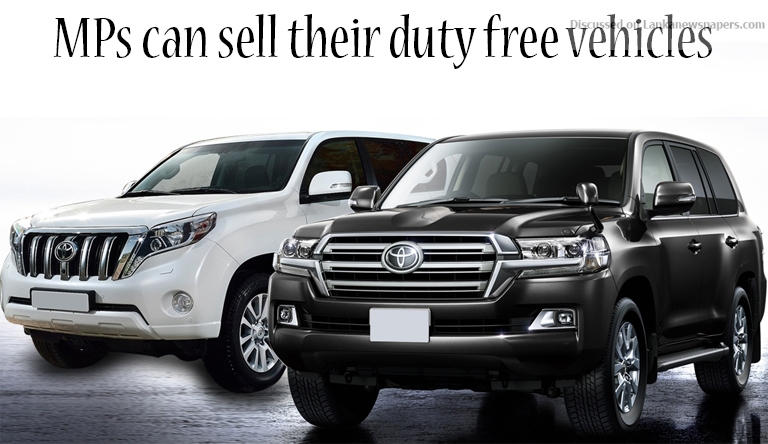 The Commission to Investigate Allegations of Bribery or Corruption (CIABOC) has cleared the way for lawmakers to sell super luxury vehicles imported under special duty free scheme available for parliamentarians since the 1970s.

Secretary to the CIABOC R.M.V. Shanthi Jayasekera has asserted that the transfer of vehicles imported by lawmakers wasn’t contrary to the Bribery and Corruption law.

Jayasekera was responding to attorney-at-law and public litigation activist Nagananda Kodituwakku, who, at the onset of the Sirisena-Wickremesinghe administration, moved the Supreme Court against the CIABOC for not initiating action against those who sold their vehicles.

Kodituwakku told The Island that he raised the issue with the CIABOC in late 2015, soon after the last parliamentary poll. Additional Solicitor General Dilrukshi Dias Wickramasinghe, President’s Counsel, was the Director General, CIABOC at that time.

Kodituwakku quoted Jayasekera as having told him that following careful consideration of material gathered by the CIABOC, the Commission decided to discard the complaint on the basis the material revealed therein were not contrary to the Section 70 of the Bribery Act.

Jayasekera had said that she was acting on the instructions of the Commission. The CIABOC top management comprises Justice W. Lal Ranjith Silva, Justice T.B. Weerasuriya (Chairman) and Neville Guruge. Jayamanne functions as the Director General responsible for the execution of the operations, including high profile project to adopt a new anti-corruption plan.

Kodituwakku said that regardless of CIABOC’s decision, he would go ahead with planned action in the Supreme Court against the car permit abuse. Kodituwakku said that he would file an amended petition in respect of contempt charges made against the three Commissioners and its Director General, in addition to a fresh petition seeking restoration of lawmakers’ vehicle abuse case. The lawyer said that he could make submissions before August 30.

The former senior Customs officer said that in the wake of CIABOC determination, lawmakers would breathe a collective sigh of relief as all political parties except the JVP allowed its members to sell vehicles imported on duty free permits issued by parliament.

Each permit allowed tax exemption of over Rs 30 mn, Kodituwakku, said adding that such special privileges should be examined against the backdrop of moves to impose special additional tax on those who privately owned vehicles in case their annual income is over Rs 500,000.

Kodituwakku challenged political parties to publicly state their position on special status given to lawmakers at the expense of the hard pressed public.

In his submissions to the Supreme Court, Kodituwakku asserted that the state suffered a revenue loss of Rs 7 bn annually due to lawmakers selling vehicles to those who could afford to pay as much as Rs 25 to Rs 30 kn or more to acquire super luxury vehicles.

According to data pertaining to re-registration of vehicles obtained from the Registrar of Motor Vehicles (RMV) in accordance with the Right to Information Act, the vast majority of lawmakers in current parliament opted for Toyota Land Cruisers.

Responding to another query, Kodituwakku said that the government, in its first fiscal policy statement delivered on 2015 Nov 20 assured that lawmakers’ duty free vehicle scheme would be rescinded. Alleging that the government reneged on its own promise, Kodituwakku pointed out that during Mrs. Wickramasinghe’s tenure as DG, CIABOC, he was told in writing that loss of revenue caused due to implementation of government policy in respect of duty-free concessions given to members of parliament.

Kodituwakku, who hold UK dual citizenship emphasized that the crux of the matter was that those who bought vehicles imported on duty free permits were not entitled for that privilege.

In accordance with the 19th Amendment to the Constitution enacted in April 2015, lawmakers are entitled to import duty free vehicles every five years.

Kodituwakku said that those who had acquired lawmakers’ vehicles but refrained from registering them for obvious reasons were likely to take advantage of the CIABOC determination.