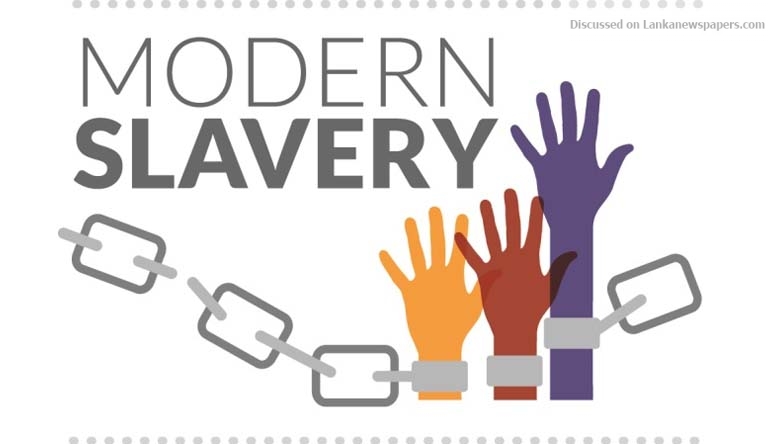 Construction sites, fishing and factories are examples where modern slavery occurs. Sri Lanka is no exception with an estimated 45,000 people trapped in this unfortunate category, a global campaigner against modern slavery said in Colombo last week. Matt Friedman, CEO of Hong Kong-based the Mekong Club, noted that human trafficking is a form of modern slavery.

“Human trafficking sector has been around for 30 years and it basically started because public health people like me found girls that were HIV positive who were as young as 12-13 years old. In interviews we were told how they were tricked, deceived and forced into prostitution,” he said, recalling that, many years ago when this was discovered, nobody knew anything about what is now regarded as modern slavery.

Mr. Friedman was speaking to the Business Times during a visit to Colombo last week to connect with members of the Mekong Club in various awareness programmes.

Set up by a group of private sector companies in 2013, the Mekong Club aims to combat human trafficking and slavery and works with four industry-specific groups: banking, manufacturing, hospitality and retail. It acts as a catalyst for change – engaging, inspiring and supporting the private sector to lead in the fight against modern slavery.

“We don’t name and shame anyone; we don’t go after them (private sector); we don’t force them to do things. We do things to help them to understand the vulnerability that they have in possibly being embarrassed in newspapers, media, etc — as a preventive things,” he said.

It is estimated that 40 million people across the world are victims of some form of modern slavery while 152 million children were subject to child labour in 2016, according to the 2016 Global Slavery Index (GSI) by the Walk Free Foundation, and the International Labour Organisation (ILO).

In Sri Lanka, data shows that these include those forced into prostitution, domestic helpers who go to West Asia, people on fishing boats and construction sites.

He said (garment) manufacturers have to be concerned because supply chains is where one finds sweatshops. “If anyone finds that, they (companies) can be embarrassed in newspapers, etc. Many were beginning to be sued in different locations of the world,” he recalled. However much companies are careful about not resorting to slave labour in their apparel factories, it can happen when orders are outsourced. Manufacturers then need to find ways to ensure their outsourcing partners are also clean.

As far as the hotel industry is concerned, supply chains that supply fish could have down the line someone involved (third party contractor) engaged in slave labour.

For example if a hotel is buying from a company that could have seafood that’s tainted (exploiting workers), they could get embarrassed (in the media). So hotels are carefully looking at their supply chains to make sure the seafood they buy is not tainted.

He said in the last six years legislation around the world has forced companies to seriously address this issue. For example in the US, the California Transparent Supply Chain Act makes sure companies state in their website (even if they have one product in the US) what they are doing to address the issue of modern slavery.

The 2015 UK Modern Slavery Act provides for similar rules and regulation in addition to companies stating in the annual reports how the problem is being addressed.

He said that the issue of modern slavery continues to get a lot of media coverage. Every year the number of articles and exposes since 2015 has doubled. This year in the first six months there have been 300 articles across the world on this issue on CNN, BBC, Guardian, NYT, etc, Mr. Friedman said.

“We work with the banks because we want them to understand how human trafficking works. If they understand it clearly, then they can use their systems and procedures internally to make sure there is no relationship,” the Mekong Club noted.

The fishing industry around the world, he said, tends to be exploitative. There is a lot of literature about Thailand’s fishing industry. “It’s the long haul boats that we need to worry about (in exploitation) not those which go for a day or two and return,” he said. In the Sri Lanka case, if there are long haul boats then these need to be checked. With many people unwilling to work in the fishing industry because the work is very hard and the pay is poor, trafficking takes place in the long-haul fishing sector in Korea, Japan and even New Zealand.

Construction sites are where there is a greater likelihood of forced labour. Illegal migrants are deceived and tricked. When a worker is not paid what he was promised and cannot leave that situation (being abroad), that is forced labour. They are stuck to the job because they also have payments to make and settle debts; they don’t have choice.

“In Sri Lanka girls and boys are forced into prostitutions, we see it happening across South Asia …they also get tricked and deceived in being taken away from the community,” he added.

In China, there are instances where a man walking on the street is pulled into a van, driven to a high-walled kiln and forced to work with no escape.

Exploitation on fishing boats: People go to a small restaurant to get food and then their drinks are laced with drugs, making them drowsy and sleepy. Days later they wake up in a boat and are forced at sea to work for 4-5 years. No escape.

Another way of exploitation that leads to modern slavery is being trapped in debt. If you can’t pay, you are forced to come and work or send a member of the family to work to pay that debt, Mr. Friedman noted.