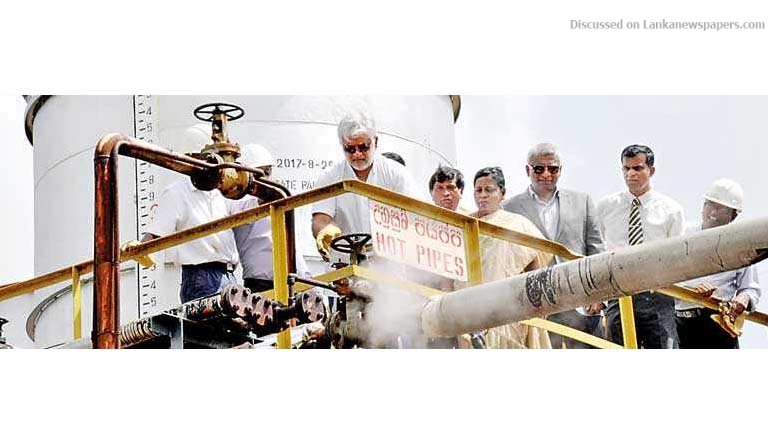 Recognising the rapid growth in the local construction industry and increased demand for bitumen, the Ceylon Petroleum Corporation (CPC) yesterday re-ventured into manufacturing bitumen after six years at the country’s sole refinery located in Sapugaskanda. Petroleum Resources Development Minister Arjuna Ranatunga described the venture as a re-strategised effort of the CPC, particularly in the operations of Sapugaskanda refinery to support the bitumen manufacturing process.

“By commencing bitumen production after six long years, we envision contributing towards the sustainable growth of the country, enabling us to produce quality material in-house and save a substantial amount of Government funds that would be otherwise spent on importing finished product,” he said.

The Minister noted that bitumen was a profit-making business model that was closed down in 2012, resulting in the fall of CPC’s then-75% market share to below 25% today. However, he expressed confidence in the staff of the institution, adding that it will be a turnaround as the market leader once again.

Ranatunga also said that he intends to ink a memorandum of understanding (MOU) regarding the second refinery in the country with a foreign investor by the end of this year.

“My intention is to build a new refinery in the next 18 months, with the help of foreign investors. Already we have received around four to five proposals, and I expect that we could sign a MOU with a viable investor by the end of this year,” he added.

According to Ranatunga, the refinery investment is about $2 billion to $2.5 billion, which will have the capacity to produce 125,000 barrels per day or more, with potential to re-export the excess production.  The current capacity at the Sapugaskanda refinery is around 35,000 to 38,000 barrels per day.

The Minister said that he will soon seek Cabinet approval to finalise decisions on the proposals received thus far to award the project.

He charged that the monetary benefit of increasing fuel prices were not passed on to the CPC, but that it went straight to the Treasury coffers.

Noting that he is open to suggestions and innovative ideas, Ranatunga pledged to turn around the institution by introducing drastic changes, while urging the staff to support these efforts.

The Minister extended a special appreciation to the engineers of CPC for their significant contribution in keeping the 50-year-old refinery operational and serving the general public of the country.

Petroleum Resource Development Deputy Minister Anoma Gamage said there is a lot of potential for the CPC to regain its lost market share, if they could tie up with the Road Development Authority (RDA) to build roads in the villages. “There are about 600 kilometres of road that needs to be built in one Pradeshiya Sabha. So if we can get together with the RDA to build these roads with our bitumen, I think we can make a significant amount of revenue, while continuing the development agenda,” she said.

CPC Chairman Dhammika Ranatunga said with the first phase of production, they expect to cater to 40% of the total requirement, with a daily output of 150MTs. According to him, the production of bitumen also enables CPC to increase total diesel output by 15% and furnace oil by 35% to 40%.

He believes with continuous improvements towards the refinery’s processing capacities, they are aiming to increase bitumen production to 225 MTs per day, and thereby increase the total supply to 60% towards the end of the year.

“With increased production of bitumen, not only we are able to positively impact the local construction sector, by providing locally produced quality bitumen at competitive prices, but also be able to enhance values of the refinery to uplift SMES where the use of bitumen is high,” he pointed out.

The ability to introduce bitumen at a competitive rate will positively impact the local construction industry by reducing their cost of raw material. The CPC expects an increase in profitability and enhancement in refinement, once the processing commenced locally.

The Chairman said the CPC will also have greater control over the quality of the product, with the introduction of a R&D unit with a fully-fledged laboratory and skilled professionals in the near future, and that they expect to continue to uphold the quality to maintain international standards.

“Our main objective is to make CPC a profitable institution, and in that journey amidst all challenges, we will continue to introduce new mechanisms and ventures to make money, while protecting these State assets,” he added.

Bitumen is not only used in the building of roads, but it is also a vital component in all kinds of infrastructure and construction projects that are in progress. It is a crucial component as a binder in asphalt roads, runways, parking lots and footpaths. Moreover, the material is used in countless applications, from roofing, waterproofing, sealing and insulating for carpet tile backing, soundproofing, and mildew protection, to blind blocks, backing to mirrors, on shoes, fence post coating and soil stabilisation.