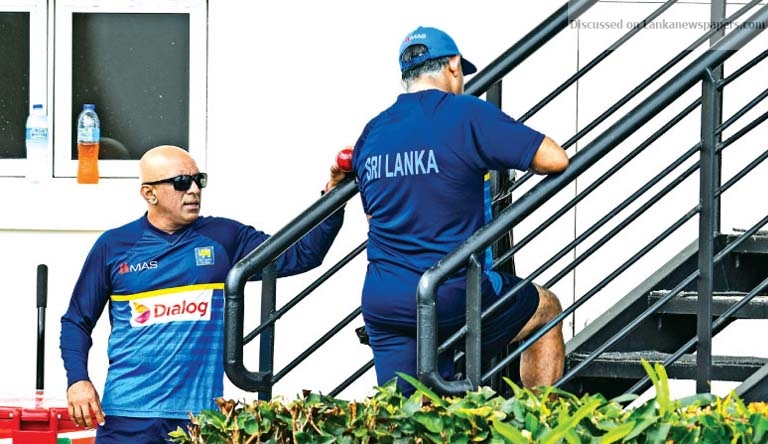 Ball tampering disgrace in the Caribbean.

The sad and shocking incident unfolding in the Caribbean involving the game the country loves most is certainly hard to swallow.

One needn’t have tell a cricketer that he is taught from the day he dons the white flannels and takes the bat and the ball into his hands that he should never question the word of the umpires. The umpires’ word is law and it is an accepted fact irrespective of whether he is right or wrong. In the spirit of cricket you have to abide by the rules. In that sense to go and challenge the umpires’ decision is really uncalled for and based on a technicality to hold up an international cricket match for two hours is unpardonable.

This is what Messrs. Dinesh Chandimal the captain, Chandika Hathurusingha the coach and Asanka Gurusinha the manager did during the drawn second Test against the West Indies at St Lucia’s.

Their action needless to say, has brought the entire country into shame. It is a stigma that will not go away or forgotten quickly, if we are a nation of sports lovers like Australia.

Barely had the dust settled on the Australian ball tampering incident involving captain Steve Smith, David Warner and Cameron Bancroft (who carried out the crime) at Cape Town in March comes this shocking event where Chandimal has been caught applying artificial substance to the ball. To make matters worse the Sri Lanka team management argued their case with ICC match referee Javagal Srinath delaying the start of play on the third morning for one session (two hours).

Chandimal has already been punished for the first incident where he will miss out the third and final Test and was docked 100 percent of his match fee. Further punishment awaits him and the two officials (Hathurusingha and Gurusinha) when charges for conduct contrary to the spirit of the game is taken up which could lead to suspension between two to four further Tests.

If the ICC goes soft on these individuals they are going to lose control of the whole circuit. They have to make an example of them because if they don’t, every Tom, Dick and Harry is going to do it and get away with it.

With the amount of technology available today it is absolute stupidity of a player to think that he can get away with what he is doing. Usually you have at least 16 cameras on the ground and there can be as many as 32 even. At any given time these 11 players on the field must be mindful of all these cameras pointing at them.

A VICTIM OF CIRCUMSTANCE

It is hard to imagine that the current group of players are going to be involved in such monkey business where they risk putting their careers on the line. If you view the footage of Chandimal’s crime it is clear that somebody instructed him to do it. The way Chandimal went about doing it you could see that he had no prior knowledge even of how to cheat. Somebody gave the sweet to him and told him do it and he did exactly that. In all innocence he did it in the stupidest way possible. Adding salt to the wound when Chandimal was asked at the inquiry what he put in his mouth, he said he didn’t know. Is this quality of the management that we have?

It’s a sad state of affairs that Chandimal who is batting at his best as he has ever done during his career to be embroiled in a situation like this. How well he batted getting a hundred with his back to the wall and instead of getting praise he deserves he is now looked upon as a cheat. He is a victim of circumstance where people in their shortsighted desire to get the results they want have ruined the future of this cricketer.

There are certain traditions of the game that you uphold and this is a Test match and not a practice game which you have held up for two hours.

Because the sport today is adopted over a number of hours on the television screen, to keep the TV audience running without the opportunity to watch cricket is really detrimental to the whole game in general.

It was surprising that the West Indies were very benevolent because any other skipper would have asked for the team’s forfeiture of the game.

Apart from the ball tampering and delaying tactics of the Lankan management there was another incident that took place where Roshen Silva was asked to change his bat by the umpire as the gum that originated from the tape around his bat was creating a sticky effect on the ball.

Silva was using a new bat so why do you want to have tape on it? These are valid questions that one needs to come forward and explain. These are incidents that have never happened on the cricket field before and one has to really carry out an independent investigation and get to the bottom of it.

The moment you take the spirit out of any sport there is no sport left. If you are not going to leave your fan and cricket supporter with a feeling of joy that his team has engaged and won fairly and squarely what’s the point? Why should he spend good money and watch the sport?

These are the important elements that affect the sport when incidents of this nature happen and needs to be nipped in the bud.

Sadly none of our leaders see the gravity of the situation to even make a comment on what has happened. How can you go forward with a tarnished management like this? The game is bigger and the country is even bigger than that. Winning and losing is part and parcel of sport.

You don’t try to win matches at any cost the way these people seem to be doing.

We should draw a parallel and follow a similar path how the Australian Prime Minister and Cricket Australia (CA) handled the whole situation to salvage the reputation and good name of their country. It is not about winning and losing but the good name of a country cannot be dragged through mud.