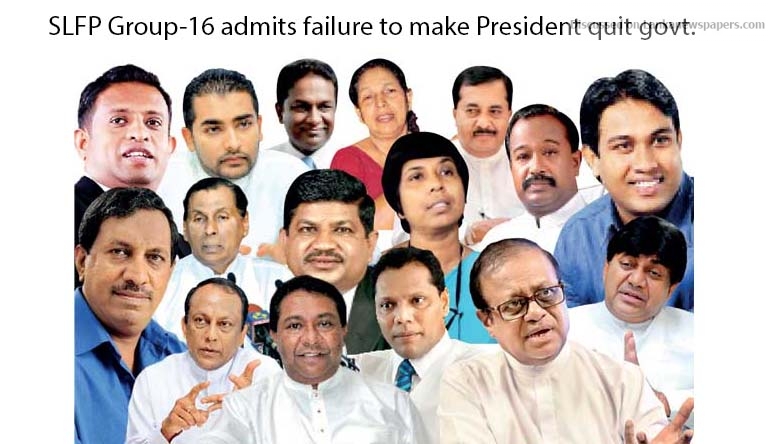 Dissident SLFP group aka Group of 16 yesterday acknowledged that its efforts to convince President Maithripala Sirisena to quit the Unity Government had been futile so far.

Perera said so when The Island sought an explanation as to why the dissident group refrained from demanding President Sirisena to withdraw SLFP support without constantly blaming those holding ministerial portfolios for propping up UNP-led government.

Perera alleged that former SLFP General Secretary Duminda Dissanayake had refrained from mentioning their proposal to quit the government thrice at meetings chaired by President Sirisena. Even Dissanayake’s successor, Prof. Rohana Lakshman Piyadasa had been reluctant to read it out and made an attempt to distort its meaning. “We intervened to ensure Prof. Piyadasa repeat our proposal,” Perera said.

Responding to another query from the electronic media, Abeywardena warned of dire consequences unless they reached a consensus with Joint Opposition/Sri Lanka Podujana Peramuna ahead of forthcoming Provincial Council polls. Reiterating their commitment to re-unification of factions, Abeywardena asserted that the failure on the SLFP’s part to reach common understanding would destroy everything. The former State Minister likened the situation to them committing suicide.

Perera said that the SLFP had deteriorated to such an extent it couldn’t even organize a proper media briefing at its main office at T.B. Jayah Mawatha. A smiling Perera said that the media probably sought the SLFP stand on issues from UNP main office at Sirikotha, where decisions were made on behalf of both parties. Perera criticized SLFP colleagues, newly appointed National Organizer Duminda Dissanayake and UPFA General Secretary Mahinda Amaraweera for pursuing the UNP line.

When Hiru representative pointed out that Dissanayake had recently challenged Perera to contest the next parliamentary polls without entering parliament through the backdoor, Perera shot back: “Having entered the Uva Provincial Council in 1988, I entered parliament though the National List and through vote.”

Commenting on ongoing efforts to unify various factions, Perera revealed how President Sirisena acknowledged that the party couldn’t move forward unless they re-joined. Perera quoted President Sirisena as having told a group senior party officials that the debilitating setback suffered at Feb 10, 2018 Local Government polls was a lesson to all of them.

Abeywardena, then asked how one could rule out President Sirisena and his predecessor, Mahinda Rajapaksa coming to an understanding especially in the backdrop of US President Trump and North Korean leader meeting in Singapore recently. Abeywardena said that anything was possible in politics. When the media asked whether Abeywardena could specify whom he compared in Sri Lanka with US leader, the former minister said journalists could come to their own conclusions.

Perera said that they voted for the No Confidence Motion (NCM) against PM Wickremesinghe on April 4, 2018 and then switched allegiance to the Opposition because they were convinced that the UNP taking the country in the wrong path.

Responding to a series of questions, Perera discussed how the UNP could be undermined by the SLFP quitting the administration. Perera said that the moment the SLFP quit, the UNP would have to reduce the number of ministers to 30 in accordance with the 19th Amendment to the Constitution. Perera pointed out that President Sirisena could take a sudden and unexpected decision. Perera cited the then SLFP General Secretary shocking move to switch allegiance to the UNP to justify his assessment.

Political parties represented in parliament, including the four-party Tamil National Alliance (TNA) were in turmoil and unexpected situations were possible, both Abeywardena and Perera said.

Responding to another query, Perera admitted that in case the SLFP decided to quit the government, seven or eight members could switch their allegiance to the UNP