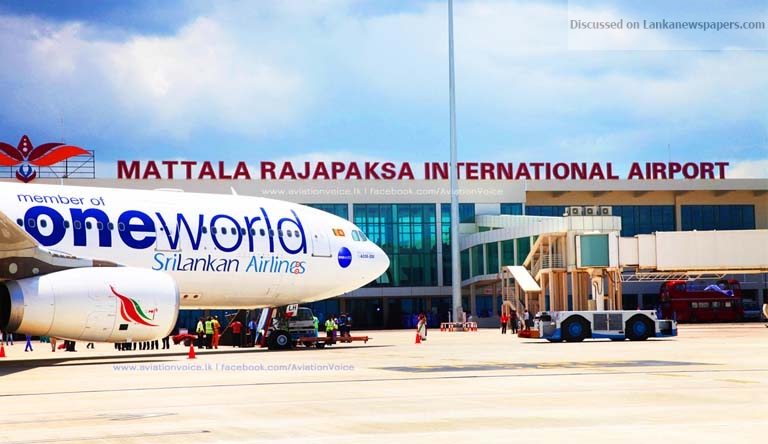 The Mattala Airport joint venture with the Airports Authority of India (AAI) is at a crossroads, with the Indian Government stalling discussions on developing a comprehensive business plan to reboot the venture.

Responding to a request from their Sri Lankan counterparts in January for a more detailed venture following the evaluation given by the Technical Evaluation Committee (TEC), the AAI proposed to develop the business plan together as the proposal was for a joint venture, highly-placed Government sources told the Daily FT.

However, the proposal was not followed through by the Indian Government, Daily FT learns. Meetings to discuss the venture in detail are yet to happen.

The Indian Government submitted the proposal in August last year with representatives from the AAI visiting Sri Lanka earlier this year for a more detailed assessment of the venture. The initial proposal by Sri Lanka’s closest neighbour was an investment of $ 205 million while their Sri Lankan counterpart was expected to share the balance $ 88 million, totalling $ 293 million, as per their assessment of the net worth of Mattala Airport.

The proposal from AAI proposed a share of 70% for their investment on a 40-year lease. However, the Sri Lankan Government wanted to negotiate the shareholding at a 60:40 ratio depending on the business plan.

According to Transport and Civil Aviation Deputy Minister Asoka Abeyasinghe, the Government is not satisfied with the proposed investment either.

“They are proposing an investment of $ 205 million only. However, the initial capital spent on the infrastructure development tops $ 300 million. The negotiations are stalled as the governments cannot agree on the investment value as well,” he said.

Last week the only airline flying to Mattala, Flydubai, terminated its daily flight to Mattala Airport until November citing an unprofitable route and high costs incurred due to bird accidents causing damage to aircraft.

The Deputy Minister said that the ministry hoped to focus on charter flights to provide transport for those seeking foreign employment in the Middle East. The Foreign Employment Bureau has been approached for negotiations to set up a branch in Hambantota to handle the situation, he said.

“We are looking at operating one flight a day from Mattala where the passengers can be given a concessionary rate ticket as landing charges in Mattala are cheaper. The Chairman of the Sri Lanka Foreign Employment Bureau Dileepa Wijesundara is a professional with a lot of airline-related experience and is already working on the job. We will negotiate with some of the airlines to make the project feasible,” Fernando told the Daily FT.

The SLFEB plans to offer the passengers transportation to Mattala from their regional offices, which will also assist their officials in the processing, registration and monitoring needed before departure, he said.