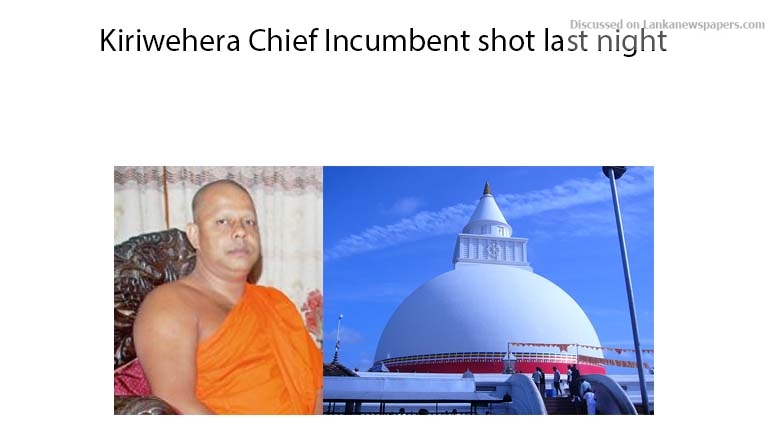 Kiriwehera Temple Chief Incumbent Venerable Kobawaka Damminda Thera and another monk were injured when they were shot by unidentified gunmen this evening, police said.

They said the shooting incident occurred at 11.00 p.m at the temple.

The monks were admitted to the Kataragama District Hospital but were later transferred to the Hambantota Base Hospital, police said.

The motive behind the shooting was unknown. The Kataragama police are conducting investigations.

Venerable Dhamminda Thera was appointed the Chief Incumbent of the Kirivehera Rajamaha Viharaya in Kataragama on December 19, 2013, by the Sangha Sabha led by the Malwatte Mahanayaka.

He was a student of Ven. Dr. Aluthwewa Soratha Nayaka Thera, the former chief incumbent of the Kataragama Kirivehera Temple and Chancellor of the Uva Wellassa University passed away at the age of 70 on September 27, 2013, and took over the post after his demise.