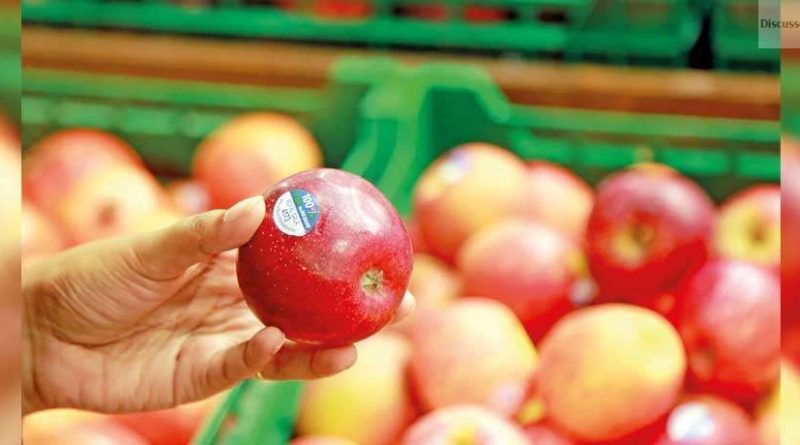 For the watchful consumer,  reading labels on their food items is simply an act of habit. While the containers of most food items tell you exactly what you’re about to purchase, when it comes to fruits, we’re often left puzzled; all these fruits seem to have is a little sticker containing numbers.

Fortunately these numerical stickers give consumers useful insight and can tell them if the fruit has been genetically modified. The sticker explains whether the fruit was grown organically or using traditional methods. These stickers containing 4 to 5 digit numbers were first introduced by supermarkets in the early nineties as a method to identify bulk produce and to make inventory control easier. Known as the Price Look Up (PLU) code, they identify produce items based on various attributes including the commodity, variety and growing methodology. The codes are assigned by the International Federation for Produce Standards (IFPS), which comprises produce associations across the world. However this coding system is voluntary and has not been made mandatory by any governing body. 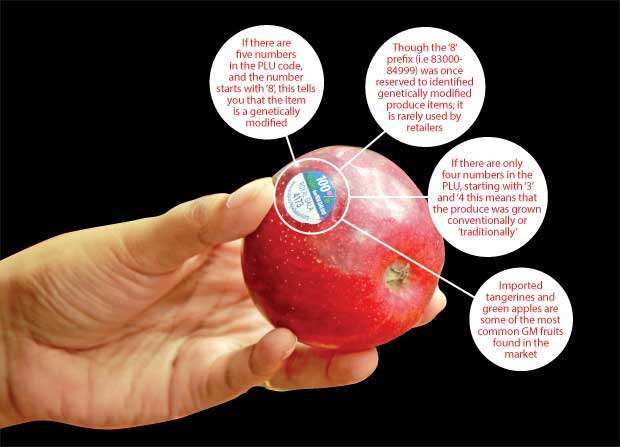 The Daily Mirror visited several supermarkets in Colombo to take a look at the varieties of fruits sold and to see if we could decipher the secret codes. We observed that only a few varieties were labelled with the PLU code such as Fuji apples imported from New Zealand and mandarins imported from Australia, labelled with the 3000-4999 range codes. Many other varieties of fruits such as pomegranates and bananas only carried stickers with their respective brands.

Public Health Inspector’s Union Secretary B. M. M. Balasooriya said that even though it is practised less in South Asian countries, it is required in many European countries as well as the United States, for retailers to abide by this labelling system. He added that genetic modifications and chemical exposure in locally produced fruits are lesser compared to imported varieties.

“However we have observed a recent trend where imported mangoes and bananas are sold by retailers. A normal mango would weigh approximately 250g while these GM mangoes would weigh about 500 grams. The fruit is generally bigger than their average counterparts,” he added.

Reading the fine print
Even though the PLU code is a simple enough key to identify how the fruit you’re about to purchase was grown, learning to read the fine print will give you the opportunity to make an informed decision about your diet.

“Organic food starting with the  number 9 code is available in Sri Lanka, but it’s difficult for consumers to detect. These are imported and sold especially in supermarkets and hotels in limited quantities as they are usually very expensive,” Balasooriya said. “Fruits with codes starting from 3 and 4 are the main varieties sold in Colombo. This is due to the needs of the consumer. Some may just want to eat an apple while another may be interested in the nutritional value. Such a person will purchase chemical free foods even at a higher cost. In one way it boils down to awareness and affordability of food,” he said.

Unfortunately some fruits aren’t labelled under the international standards, making it impossible to identify how the fruit was grown, according to Balasooriya. “Perhaps it is because customers will be reluctant to purchase the fruit if they have been labelled as a GM fruit,” he said.   There is no legal requirement in Sri Lanka to label imported fruits or vegetables in this manner. Balasooriya believes authorities have been reluctant to implement a policy to regulate such imports. “There are no barriers for the import of GM fruits or vegetables. Therefore such foods are imported freely. There is no authority to regulate these imports. We as public health inspectors are willing to cooperate with such efforts. But laws and policies should be formulated first,” lamented Balasooriya. 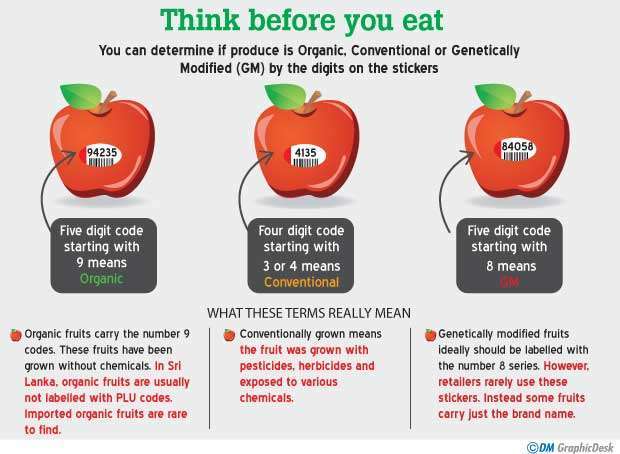 The import of GM foods is being controlled by our authorities, but we don’t advertise or raise awareness about the consumption of GM foods

“For instance if a certain variety of a GM fruit is imported to Sri Lanka and a locally sourced sticker is pasted on the fruit indicating that the fruit is an organically grown \variety, there is no law to tackle such an issue. There is no responsible authority to address such scams.”

“Regulation is essential. Scientific studies have linked genetically engineered foods with various illnesses, especially cancer, genetic disorders and non communicable diseases. However multinational corporations with vested interests have prevented this message being carried out to the public and have encouraged the consumption of these GM foods over a long period of time.

Such companies focus on acquiring profit for fewer costs through GM crops. They don’t have any regard for the health and well-being of the consumer. A consumer may only be capable of spending Rs. 50 for an apple. In contrast an organic fruit or vegetable may cost more than Rs.100 as these are grown free of chemical pesticides and fertiliser and requires effort,” the public health officer explained.

In many countries GMOs are regulated if it’s for local consumption. But their exports aren’t regulated if the market doesn’t require them to. It’s therefore the duty of local authorities to take these regulatory measures upon themselves. For instance, the tea exported to Russia created controversy where the quality of the island’s tea exports was questioned. As a result Sri Lankan tea imports were banned by Russia. Sri Lanka too should implement strong regulations such as these. The government must implement directives as it’s their duty to raise awareness among citizens as well as to maintain public health and well-being,” he said.

No awareness of GM food
The Daily Mirror approached the Director of the Nutrition Co-ordination Division of the Health Ministry, Dr. Rasanjali Hettiarachchi to inquire about awareness initiatives regarding GM foods, formulated at the Ministry level. The Director said there were no such programmes in practice at present.

“The import of GM foods is being controlled by our authorities, but we don’t advertise or raise awareness about the consumption of GM foods,” Dr. Hettiarachchi said. When asked whether GM fruits and vegetables being labelled similar to the sugar levels being indicated on beverages, is an idea worth deliberation, Hettiarachchi said, “The Food Control Unit prevents the import of GMOs, which prevents the need for such labels,”

Meanwhile she said the Ministry is deliberating the introduction of a star grading system for the identification of healthy and unhealthy foods. Dr. Hettiarachchi believes that this move would address the lacunas in awareness among consumers.

In 2012, research on consumer attitudes towards labelling of GM foods in Sri Lanka carried out by researchers of the Peradeniya University’s Postgraduate Institute of Agriculture concluded that most Sri Lankan consumers are unaware of GM food and the majority of them perceive GM food as risky to human health. The study didn’t find a significant relationship between reading labels on food items and purchasing decisions of GM food. However many consumers rejected the purchase of GM food and a vast majority were of the view that GM food should be labelled, the research revealed.

We took to the streets of Pettah to speak to both fruit vendors and consumers and inquired about trade patterns and purchasing habits. One vendor in Pettah said that the fruit is restocked on a daily basis by a fruit dealer in Hokandara. When asked about the stickers with the PLU code, he said only apples imported from the US sport these stickers. We observed another variety of apples from New Zealand which had only the brand name while mandarins sold at this stall had no stickers.

Rajendran from Grandpass works at a fruit stall in Pettah. He said that the stall he works in is one among several owned by a reputed fruit vendor in Pettah. “The owner of this stall has

been vending fruits for over 40 years in Pettah. The fruits are restocked daily from suppliers such as Sunil Traders and Nawagiri Fresh Fruits,” Rajendran said. Asked if he has any knowledge of the nutritional value of the fruits he sells, he said he does not know much. “I’m simply a salesman here. The operation is run by the store owners and we know nothing beyond the sale of fruit. On a good day we make a profit of about Rs. 50,000 as many commuters and travellers boarding the buses or trains from Pettah prefer to buy fruits as snacks,” he said.

“We don’t know about these things” Nirosha from Badulla

Nirosha from Badulla prefers to include fruits in her diet on a regular basis. However when asked if she is aware of the nutritional quality of the fruits she buys, she said she usually doesn’t pay attention to this aspect. Nirosha was carrying a bagful of imported grapes in a container with a PLU sticker which she purchased from a fruit stall in Pettah. We asked her if she preferred to inquire from the vendors of the quality of the fruit and if she was aware of GM fruits. “We don’t know about these things, so we don’t bother to inquire,” Nirosha said.

Roshan Kumara from Anuradhapura, who had purchased a couple of apples from a vendor in Pettah, said that he didn’t know that GM fruits were sold in the market. “Although I purchase fruits regularly, I only check if the fruits appear to be fresh. I haven’t thought about its nutritional value or if it has been GM ,” Roshan said.

A leading advocate of organic farming with years of experience at the Food and Agriculture Organisation sounded a warning on consumers of GM foods. “You can find many examples of scientific information providers such as scientists and researchers being overpowered by companies with vested interests. 65% of Americans are diabetic and yet we refer to their expertise on nutrition and dietary guidelines. Fortunately independent groups are now able to share evidence based double blinded studies, thanks to the internet. They expose the dangers of consuming GM foods and food exposed to chemicals,” the expert said.

According to the source, information revealed by such studies are nothing short of frightening. “Research indicates that GM BT corn can cause infertility. Years ago, natural papaya varieties were completely wiped out in Hawaii by a virus. Very soon Sri Lanka too wouldn’t have endemic papaya, but the Red Lady Papaya only. Gradually the seed gene will be lost,” he predicted.

“A number of health problems in Sri Lanka such as diabetes surfaced  with the start of chemical farming. If we are to rectify this situation there needs to be a change in attitudes. We all must save each other from the dangers of an unhealthy diet,” he opined.