Former Central Bank Governor Ajith Nivard Cabraal yesterday charged that the net borrowings by the present government almost equal the country’s current foreign reserve stock and hence, hinted that the pressure on the rupee is not unwarranted as the Central Bank says. 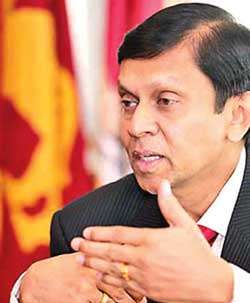 According to Cabraal, the net borrowings of the Sirisena-Wickremesinghe government since 2015—which include the sovereign bonds sold totalling US $ 7.1 billion since 2015, recent US $ 1 billion term loan and net increase in development bonds— amount to US $ 8.9 billion.

It therefore follows that only US $ 0.2 billion still remains out of the foreign reserves of US $ 8.2 billion that existed at the time the Rajapaksa government went out of office in early January 2015,” Cabraal charged.

It may therefore be pointed out that the Yahapalanaya regime has borrowed high (at around 6.2 percent) and invested low (at around 2.2 percent), resulting in an interest rate gap of 4.0 percent, on an average reserve of around US $ 7.0 billion over the three years, 2015 to 2017.

It will therefore be clear that such practice has caused the country to suffer losses of about US $ 280 million per year or US $ 840 million over the three years,” Cabraal said.

REUTERS: The Sri Lankan rupee ended slightly weaker in dull trade yesterday due to dollar demand from importers, while selling of the US currency by a state bank capped
the fall.

“The rupee might come under pressure this week with low supply (of dollars) as tea exporters would stay away due to the rain.”

Heavy monsoon rains have killed five people, prompting authorities to warn against landslides and floods in low-lying areas after spill gates had to be opened across the Indian Ocean island. The rupee hit a record low for a third straight session on May 16 and touched 158.50 per dollar after the Central Bank chief said on May 11 that the currency would depreciate gradually as dollar outflows surpass inflows.

The currency has declined 0.06 percent so far this month after a 1.5 percent fall in April. It has fallen 2.8 percent this year.

The Central Bank said on April 26 it would intervene to support the rupee when necessary and there was no reason for the rupee to be under pressure given the country’s record US $ 10 billion foreign currency reserves. Dealers said they expect the rupee to gradually weaken and face higher volatility this year due to debt repayments by the government.