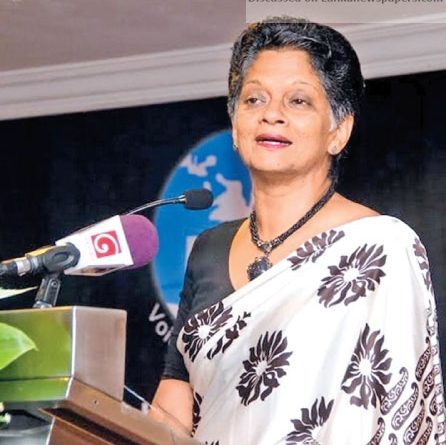 Sri Lanka’s exports in 2017 has grown by 15% to US$15.4 billion and the challenge would be to keep it going and further increasing it, said Indira Malwatte, Chairperson Export Development Board.

“Now we have a challenge of increasing exports by 15% every year for a period of 20 years,” she said addressing the launch of the 100th issue of the Sri Lanka Exporter Magazine recently in Colombo. Malwatte said the export target for 2018 has been set at US$ 17.8 billion.

The National Export Strategy which has been drawn up would be presented for Cabinet approval soon and it should be a national policy, she said. The Chairperson also made an appeal to exporters to make it happen because as a government they may not be able to continue certain things. The National Export Strategy was drawn up by consulting almost 600 stakeholders right from the North to South, East to the West with everyone possible, she said.

“It is your strategy and we have to get this implemented for our country. Each time the Prime Minister speaks, he speaks about exports and FDI’s. So it is a challenge for all of us to keep it going.”

Malwatte said that they were very proud that as a result of the National Export Strategy which was drawn up, the Budget has approved Rs 1.2 billion for development outside the EDB budget to implement some of the proposals brought up in the National Export Strategy. She said her officials were already working on setting up a launching pad for boat builders in Weligama as part that initiative.

The EDB head said a market access program for productivity improvement and market development has been introduced and the Cabinet paper for this will be presented at the next Cabinet meeting. Malwatte here expressed optimism saying she did not envisage any issue for the approval of it. A matching grant of up to Rs five million for productivity improvement or market development programs of exporters has also been proposed.