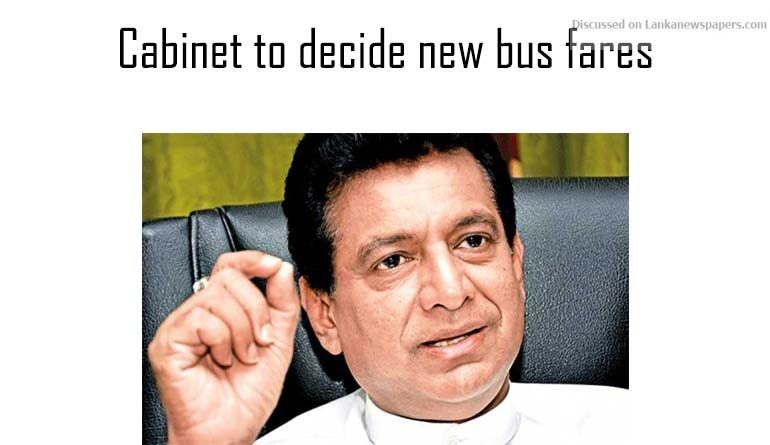 Following demands by private bus unions, the Ministry of Transport has decided to increase bus fares and is to submit a Cabinet proposal today regarding a fare hike.

“The Committee met yesterday and we decided that an increase in bus fares was necessary,” the Minister said, adding that Cabinet approval on the fare increase would be needed for it to be implemented.He noted that the increment percentage would discussed in the Cabinet paper, which will be handed over to the Cabinet of Ministers today (15 May).

The committee of experts, consisting of representatives from the Transport Ministry, Finance Ministry and the National Transport Commission (NTC), gather annually to revise bus ticket prices which is implemented on 1 June.

According to the Minister, the Sri Lanka Transport Board incurs a sum of Rs. 160 million for fuelling a month.

This year, the committee was compelled to meet prematurely due to the threat of strike action by private bus unions as a result of the sudden fuel price hike.

He also added that all the increments have been informed to the NTC. The members of the All Ceylon Private Bus Owners’ Federation (ACPBOF) and the Inter-Provincial Private Bus Association (IPPBA), addressing a press conference on Sunday (13 May), said that both associations have reached a unanimous decision that bus fares should be increased from 15 May onwards. ACPBOF and IPPBA noted that the bus fares should be increased by 20%. The associations stressed that if the demands are not met by the government, members of both the ACPBOF and the IPPBA will strike from midnight on 16 May.