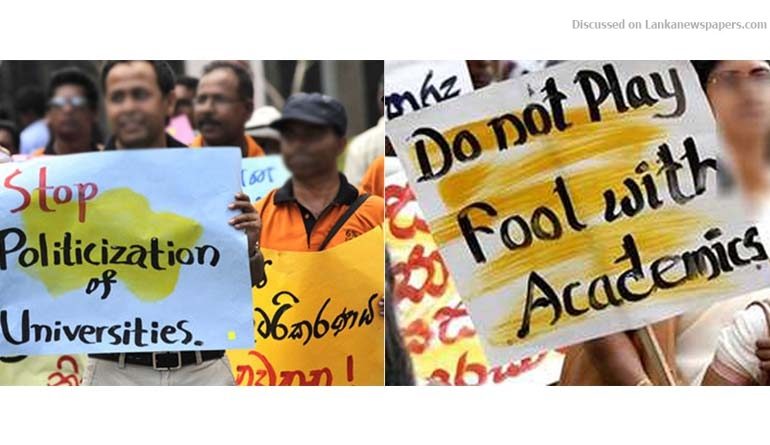 The Higher Education Ministry(HEM) and the University Grants Commission (UGC) had not made any substantial attempt to resolve month long non-academic strike leading the entire university system in the country to a standstill, University Teachers’ Association of Jayewardenepura University (UTAJU) said.

In a statement issued by the union had expressed its strong displeasure towards the related authorities for its inefficiency towards resolving the matter.

Union President Dr. Naleen Ganegoda said that the strike had severely affected regular academic and research activities at all universities.

“Obviously, this situation in universities has been brought about by certain nonsensical agreements, either the Ministry of Higher Education, the Ministry of Finance or the University Grants Commission has haphazardly made with non-academic unions from time to time.

“Examples include (a) an agreement to pay a compensatory allowance for the non-academic staff at a time when the academic staff received an increase in their allowances, and (b) a written assurance given to non-academic unions that if any increase is made in salaries or allowances in the university system in the future, it requires a common consensus among different parties.

“We strongly object to the fact that these agreements had been made in the absence of any union representation on the part of the university academics.

“Even though we respect the right any trade union has to fight for their demands, our membership strongly oppose the use of the academic allowance as a benchmark to justify their demands. This is because the academic allowance was introduced for academics in the university system to address several issues associated with recruiting and retaining individuals with higher academic and professional qualifications.

“As a solution to these salary-related issues that can emerge in the university system from time to time, we feel that a ‘special category’ should be established for university academics. Despite the fact that many discussions have taken place in this regard both at trade union levels and with the government, unfortunately, the establishment of a special category has not been materialized yet. We would like to remind the government and our fellow sister unions that it is high time we act together to make this a reality.” It added.