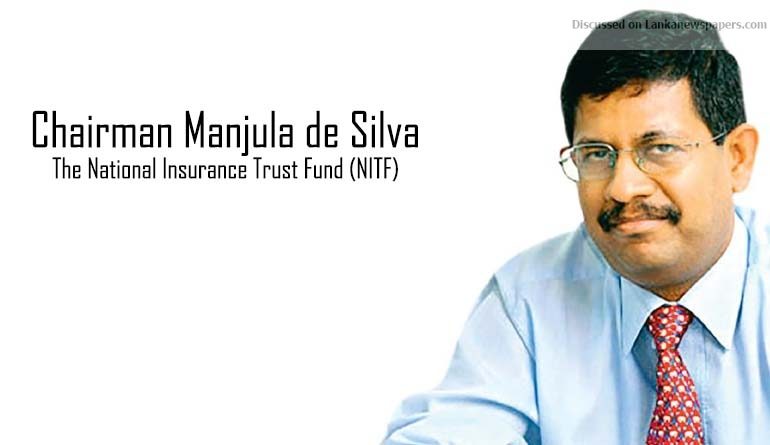 Sri Lanka’s only local reinsurance provider, The National Insurance Trust Fund (NITF) has successfully concluded the placement of its reinsurance programmes for the current year, NITF Chairman Manjula de Silva told.
“There were over 22 global reputed reinsurance giants who have accepted shares under this programme”, he said.
De Silva said all reinsurers on the panel have ratings of ‘A -‘ and above (except one reinsurer which had a State stake) meeting the requirements stipulated in the Request for Proposals (RFP).
According to him, the state-owned insurance entity, NITF has reported a Rs 734 million net profit during 2017, after settling massive claims of over Rs 10 billion (82% growth) to the public.
NITF has paid over Rs 3.1 billion to government employees Agrahara insurance claims, Rs 2.5 billion under the  National Natural Disaster Insurance Scheme, Rs 2.3 billion for reinsurance, Rs 1.9 for Crop insurance and Rs 0.2 billion for others.
The NITF contribution to the Consolidated Fund is Rs. 1.5 billion.
Impact of Natural Disasters in 2017 were;Flood under National Natural Disaster Insurance Scheme (NNDIS)Rs1.7 billion, Flood (RI)Rs 1.2 billion, Drought (Crop insurance ) Rs1.9 billion, Cyclone (NNDIS)Rs 0.6 billion  and Other (NNDIS) Rs0.2 billion.
“Last year was a challenging year, due to the Natural Disasters which occurred during the year. However, this year 2018 our net profit forecast is around Rs 4 billion”, he said.
According to the current year, retrocession cover procurement process in respect of the following reinsurance programmes for 2018 have been successfully completed.
Under reinsurance Cover for Strike, Riot, Civil Commotion and Terrorism (SRCC & T) Fund, Panel of Reinsurers led by Chaucer (Lloyds Syndicate)(30%) and includes Hannover Re (30%), placed through J.B. Boda and Co.Under Reinsurance Cover for Agricultural Insurance – Panel of Reinsurers led by Swiss Re (35%) and includes Hannover Re (30%), placed through J.B. Boda& Co and under the retrocession Cover for 30% Compulsory Reinsurance cession from the General Insurance industry ,panel of Reinsurers……led by Renaissance Re (30%) and includes Everest Re (20%), placed through Strategic Insurance Brokers.
He said, currently, the procurement process is in progress for Reinsurance Cover for the National Natural Disaster Insurance Scheme (NNDIS) which expires on 27May, 2018.“We might extend it until mid this year,” he said.
Retrocession refers to the purchase of reinsurance by a reinsurer to manage its risk exposure. Under the retrocession programme placed for 2018, NITF has obtained a cover of Rs7.5 billion,
The selection of the broker and the lead underwriter was done by a Ministry appointed Procurement Committee (MPC) on the recommendation of a Technical Evaluation Committee (TEC) following a duly-structured and transparent procurement process. In carrying out the selection, the committees considered many aspects such as cost, coverage and security.
The final selection was approved by Cabinet. Since NITF accepts 30% of all reinsurance placements made by general insurance companies operating in Sri Lanka, it is exposed to a significant risk in the event of a major natural catastrophe or even a very large single loss arising from a large risk. Hence, it was imperative that NITF obtains a reinsurance cover (retrocession) to deal with such exceptional losses that exceed a certain value. Due to the competitive nature of the procurement process, NITF secured a sound retrocession programme at a reasonable cost.

The ability of the country and the insurance industry to withstand the financial impact of a major natural calamity of the scale of the 2004 tsunami and Year 2016/17 were now substantially strengthened due to the retrocession cover obtained by NITF.