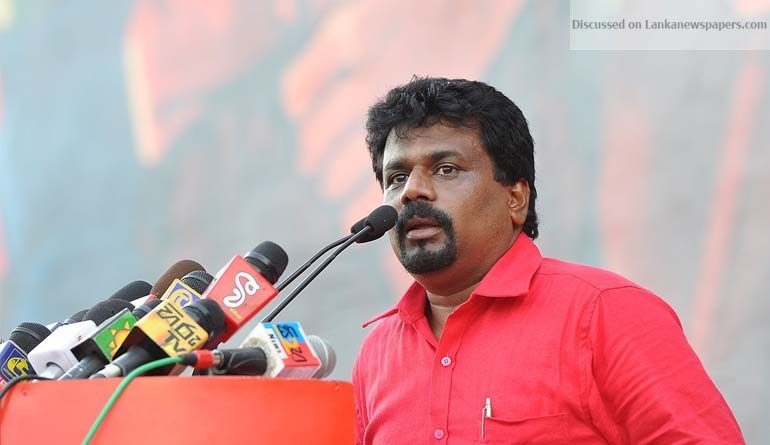 Sirisena has no control over SLFP/UPFA

The No-Confidence Motion, moved against Prime Minister Ranil Wickremesinghe, has confirmed that President Maithripala Sirisena, who is the Chairman of the Sri Lanka Freedom Party and the Leader of the United People’s Freedom Alliance, had failed to bring the parties or his group of Parliamentarians to one mindset, the Janatha Vimukthi Peramuna (JVP) said yesterday (5).
“Can a Leader who cannot control his own party run a country? Following the No-Confidence Motion, it has become clear that Sirisena and his small group are engaged in petty …political games and because of their aims, the country is being destabilized,” said JVP Leader Anura Kumara Dissanayake, addressing a media briefing in Colombo.
“The President has a gigantic task pertaining to the Central Bank Bonds scam, but without doing anything in that regard for the last three years, and ignoring the laws,  he brought in the No-Confidence Motion motivated by a political power. With the defeat of the motion that ‘power play‘ has also been defeated . The motion ought to be brought by forces behind the 8 January, 2015, victory, not only against the Prime Minister but also against the President, since both of them have betrayed the 8 January, 2015, mandate,” the JVP Leader asserted.
Meanwhile, the Premier, the Government and the United National Party (UNP) are carrying on in a manner so as to satisfy the needs of the group close to them, Dissanayake lamented.
In any event based on the things that took place in the sphere of politics until the No-Confidence Motion on 4 April, only went to demonstrate what ‘dirty ‘ and jocular rival groups exist in Sri Lanka’s politics, he added.
“It is the group with former President and incumbent Parliamentarian Mahinda Rajapaksa which made the most determined move to propel forward this motion. It is in that group that there are many accused who are implicated in monumental frauds and corruption, including the group with former Defence Secretary Gotabaya Rajapaksa, who are implicated in murders and the MiG jet fraud. Because they had the need to escape from those criminal involvements, they brought forward the motion. The other group of Rajapaksas, is the group with former Minister Basil Rajapaksa. They are always seeking to put through deals with Wickremesinghe, and divest themselves of the charges against them.”
The JVP also bitterly condemned the attack launched on the Sirasa media institution on the night the No-Confidence Motion was defeated.
Even though there are criticisms mounted against them by media institutions, this attack is an index that the politicians have no guts to answer the political criticisms hurled at them by the media, the JVP Leader pointed out.