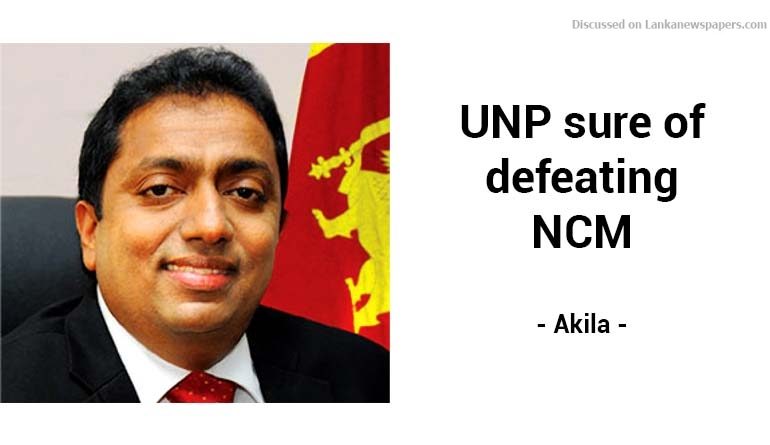 The UNP yesterday vowed to defeat the No-Confidence Motion (NCM) against Prime Minister Ranil Wickremesinghe securing more than 120 votes. With less than 48 hours remaining for the Parliamentary debate on the NCM submitted by the Joint Opposition, UNP Deputy General Secretary and Education Minister Akila Viraj Kariyawasam predicted that “unexpected forces would join hands for a sure defeat of the motion”.

UNP MP Nalin Bandara speaking to the media at the Sirikotha UNP Head Office along with Minister Kariyawasam implied that two or three members of the Joint Opposition would vote against the motion.

“Most of the SLFP members, who cry foul while being in the Government, have no peoples’ mandate. In fact they were against the January 8, 2015 people’s mandate. They entered Parliament from the backdoor. Before supporting the NCM they should have at least resigned from their Cabinet portfolios,”Kariyawasam said.

When a journalist drew the Minister’s attention to a statement by UNP backbencher Chaminda Wijesiri that they were ready to bring in an impeachment motion against the President after the defeat of the NCM, Minister Kariyawasam said the party has not yet taken such a decision.

The minister, observing that the UNP would face the NCM as one group, said the spadework for the party’s victory at the Presidential and General Elections in 2020 would commence soon after the motion.

UNP MP Nalin Bandara said the JO’s divisions would deepen following the NCM, adding that some JO MPs were already criticizing the timing of the motion. He said the SLFPers in the Government are also divided on the NCM.

“Some of them are trying to fight for their political survival by aligning with former President Mahinda Rajapaksa following the SLFP’s poor performance at the last Local Government elections. Some of them are trying to join the UNP and we welcome them, but they have no say in our party internal matters and those matters would be solved among ourselves,” he said adding that major reforms within the party are expected after April 4.