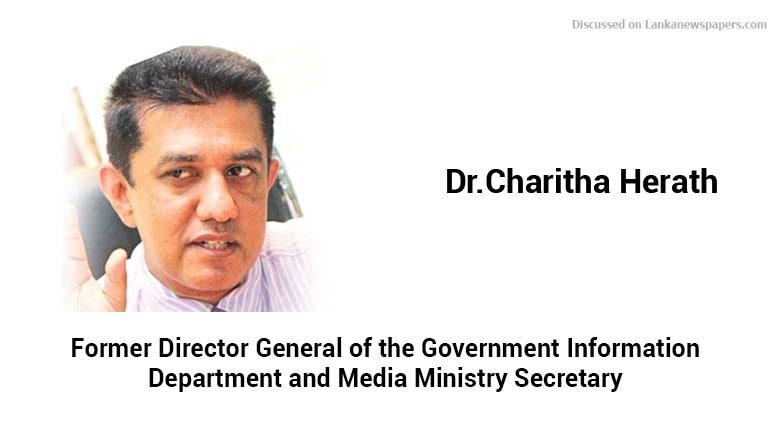 Former Director General of the Government Information Department and Media Ministry Secretary, Dr. Charitha Herath admitted on the social media network, Twitter, that IT Expert Aravind Gupta, who heads the BJP IT cell had advised the Rajapaksa campaign in the run up to the January 8, 2015 high stakes presidential election.

The BJP is the party of Indian Prime Minister Narendra Modi.

In a Twitter message on March 26 – which Herath has since deleted, the former Rajapaksa Government official acknowledged the shortcomings of the campaign’s social media strategy in the run up to the 2015 poll, and described it as “not much impressive”.

“We were in touch with @narendramodi campaign team too,” the rest of Herath’s tweet read. “But we couldn’t get more benefits from advises we got from experts like @buzzindelhi,” Herath added.

The Rajapaksa-era bureaucrat went on to tag Namal Rajapaksa, the eldest son of the former President, and Mahinda Rajapaksa’s former Spokesperson, Anuradha Herath in his tweet, asking them both: “what u think”.

Arvind Gupta was one of the chief architects of Indian PM Narendra Modi’s social media campaign at the general election. In December 2014, India’s The Hindu newspaper reported that Gupta was among those offering assistance to the incumbent President, quoting highly placed sources in Colombo. Gupta had visited Sri Lanka in November 2014, the report said, but the IT expert refused to confirm the claim and never publicly revealed the reason for his visit.

He denied reports he was helping the Rajapaksa campaign, and said the reports were “troubling”.

However, Herath’s public admission on Twitter finally confirmed the 2014 report and revealed that despite the Rajapaksa campaign’s claims, it had in fact obtained support from ‘foreign governments’ they claim defeated it in 2015.

charged that India had openly used its embassy in Colombo to bring him down.

“It was very open, the Americans, the Norwegians, the Europeans were openly working against me, including RAW (India’s Research Analysis Wing),” Rajapaksa told the Hong Kong-based South China Morning Post in an interview.

“Both the US and India openly used their embassies to bring me down,” Rajapaksa said ahead of Prime Minister Narendra Modi’s maiden visit to the country.

The claim has been oft repeated, with the defeated Rajapaksa campaign constantly claiming that an ‘international conspiracy’ had ousted the former President and installed President Maithripala Sirisena in power.