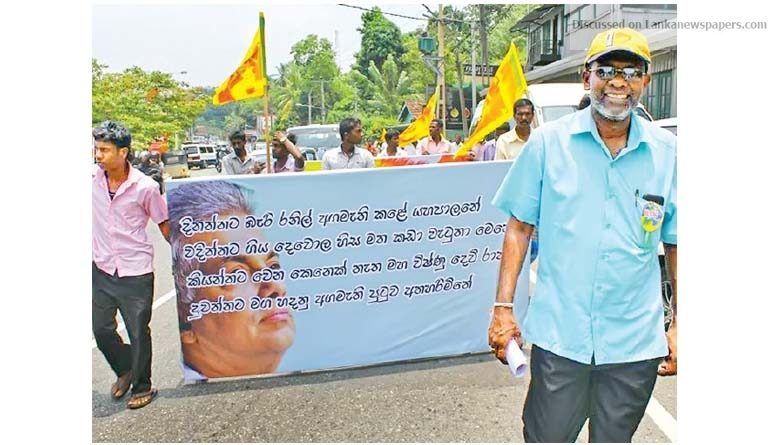 Attorney-at-Law Maithri Gunaratne, who has organized a march, from Kandy to Colombo, in a bid to force Prime Minister Ranil Wickremesinghe to resign from his post before the No-Confidence Motion is taken for debate on 4 April, was arrested by the Kadugannawa Police, during the march for being in possession of two shotguns. He was later released on bail.

Police said that Gunaratne, when produced before the Kandy Magistrate, had produced the licences for the two shotguns.

Therefore, the Magistrate had released him on bail in two sureties and ordered him to be present in Court on 13 June.

The Police Media Unit said that a jeep belonging to Gunaratne, which was found parked in a suspicious manner at Urapola in Kadugannawa on the Colombo-Kandy Road. A search of the jeep had revealed 10 bullets and two shot guns.

Meanwhile, at 11.30 yesterday morning, a Prado Jeep, registered in the name of Sonali Gunaratne, a resident of Barnes Place in Colombo, was discovered parked suspiciously near the Priyantha Funeral Parlour at Eeriyagama, Peradeniya. It was found to contain 98 cinnamon poles. It was taken into custody by the Police. The father of Attorney-at-Law Gunaratne, Herman Gunaratne had told the Police that the vehicle belonged to their family.

Together with the vehicle, Perumal Muththukumar, a resident of Deniyaya who claimed to be the driver, was also arrested by the Police. He is scheduled to be produced before the Kandy Magistrate today (1 April).

Police internal sources said that the driver had mentioned that the cinnamon poles had been brought to put up flags on the route of the march.

However, Police sources revealed that there is strong suspicion that these cinnamon poles had been brought to create a clash and inconvenience the Prime Minister.

“There are two reasonable reasons that enable us to say this. One is that there were only cinnamon poles inside the jeep and no flags. If they had brought these poles to put up flags, then the flags should have been there.

The other fact is that when the march was in Eeriyagama, at about 11.30 a.m. which you approach as soon as you pass Peradeniya, towards Colombo, this vehicle with tinted windows was parked in an isolated spot. The driver was not there either, at that time,” these sources said.

In a statement made by Attorney Gunaratne’s father to the Peradeniya Police, he said that these cinnamon poles had been cut from an estate belonging to him at Ahangama in Matara.
This march was due to end yesterday at Mawanella.

Police said that their officers had been deployed at every junction from Kandy to Mawanella to prevent traffic congestion during the march.

A spokesman said that however, this jeep with the cinnamon poles inside had been parked in a place where there was no Police presence.

Today the march is due to begin again from Mawanella and is scheduled to end at Weweldeniya. It was planned initially that on the final day it will begin from Kiribathgoda and travel up to the Parliament roundabout on 4 April.

Although we attempted to contact the Secretary of the United National Freedom Front, Attorney Gunaratne, to inquire into this, we failed to make contact.