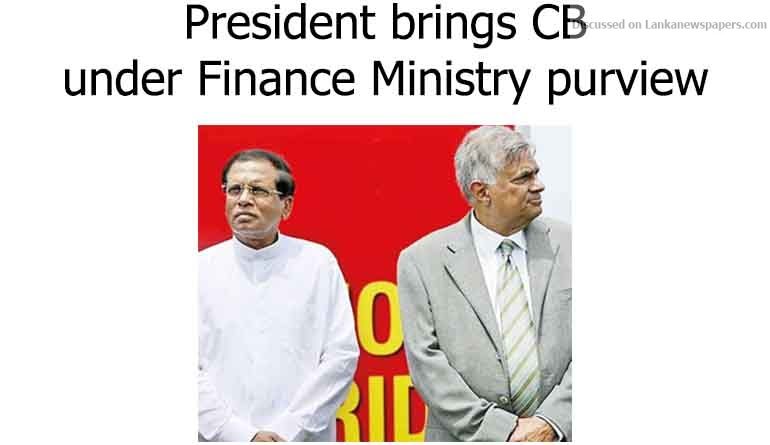 According to the Gazette, the Monetary Law Act No. 58 of 1949, Public Utilities Commission of Sri Lanka Act No. 35 of 2002, Exchange Control Act No. 24 of 1953, Securities and Exchange Commission of Sri Lanka Act No. 36 of 1987, National Youth Service Council Act No. 69 of 1979, Youth Corps Act No. 21 of 2002, Children and Young Persons Ordinance No. 48 of 1939, National Insurance Trust Fund Act No. 28 of 2006 have also been omitted from the purview of the Ministry of National Policies and Economic Affairs, held by Prime Minister Ranil Wickremesinghe. However, President added Sri Lanka Insurance Corporation under the PM’s ministry from Public Enterprises Development Ministry as well as Department of Food Commissioner.

The removal of the Central Bank was brewing for awhile after criticism was levelled following the Central Bank bond scam and the subsequent information revealed through the Presidential Commission of Inquiry appointed to probe irregularities in bond transactions.

The appointment of former Central Bank Governor and that the bond scam would not have occurred had it been under the Finance Ministry were among the allegations made by various factions.

In 2015, after the election of President Sirisena, the Central Bank was put under the Ministry of National Policies.

Political analysts were busy last night trying to assess the reasons for Sirisena’s move exactly one week before the contentious and much-publicised No-Confidence motion against the Prime Minister. They claimed that the move was aimed at further undermining the Premier as well as the coalition partner, the UNP, though the Ministry of Finance is held by reformist and private sector-friendly Mangala Samaraweera.

Some claimed it was a compromise move in a bid to appease the ranks of SLFPers within the Cabinet and the coalition Government as well as the larger Opposition, especially the pro-Mahinda Rajapaksa Sri Lanka Podujana Peramuna. However others viewed the move as yet another visible clash between the President and the Prime Minister.

It was speculated that there were high-level talks on Tuesday night to avert the changes and some pro-Government and anti-Rajapaksa forces were busy trying to make both Sirisena and Wickremesinghe meet halfway to ensure political stability until the 2019 presidential polls.

Sans political connotations, private sector leaders welcomed the return of the Central Bank and the SEC to the Finance Ministry as it was the case for a very long time.