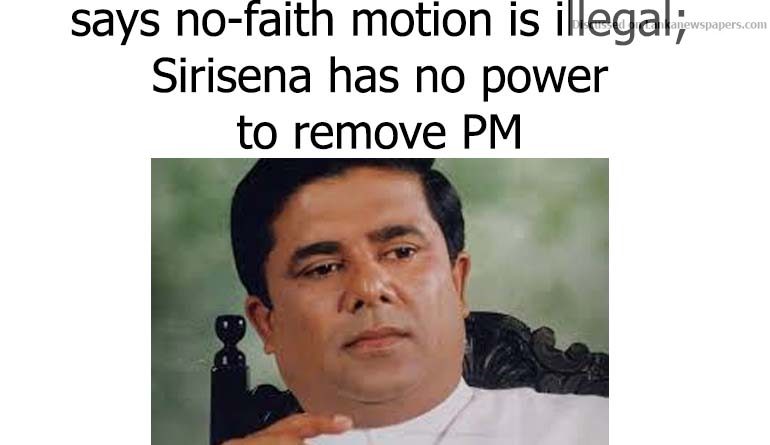 “says no-faith motion is illegal; Sirisena has no power to remove PM”

The UNP yesterday warned President Maithripala Sirisena and the SLFP that the no-confidence motion (NCM) moved against UNP leader and Prime Minister Ranil Wickremesinghe would boomerang on them.

Addressing a media briefing at Sirikotha, Galle District MP and Home Affairs Minister Vajira Abeywardena said the SLFP shouldn’t take political advantage of the Joint Opposition-led NCM at the expense of the UNP.

Abeywardena said the SLFP had violated the 2015 mandate received by President Sirisena by throwing its weight behind the JO move aimed at causing political instability and uncertainty.

Abeywardena said that an unprecedented crisis could lead to Speaker Karu Jayasuriya being entrusted with wide powers till issues were sorted out.

Abeywardene insisted that contrary to propaganda, Wickremesinghe hadn’t been implicated in Treasury bond scams. Therefore, the NCM based on unproven allegations pertaining to treasury bond scams couldn’t be the basis for the NCM, the minister said.

Asked to explain the Speaker’s status in case Wickremesinghe lost the NCM or President Sirisena tried to remove the PM by dissolving the Cabinet, a smiling Abeywardena said that the Speaker could end up receiving the powers of the Office of President in accordance with a Supreme Court opinion until problems were resolved.

The UNP called media following the SLFP’s claim that it wanted to continue with present arrangement with the UNP sans Wickremesinghe as the PM.

Abeywardena said the party would stand by its leader and ensure the defeat of the NCM.

Those who had moved the NCM were obviously unaware of the far reaching changes in place since the enactment of the 19th Amendment to the Constitution in April 2015, Abeywardena said, adding that the President was powerless as far as constitutional provisions for the removal of the PM were concerned.

Abeywardena said there was the possibility of President Sirisena losing, at least temporarily, the authority to exercise powers in the event of a constitutional crisis.

Abeywardene recalled that the UNP had campaigned for Maithripala Sirisena at the 2015 presidential poll on the basis that Wickremesinghe would be appointed the Prime Minister. The UNPer insisted as the 2015 mandate had been received by bothe Sirisena and Wickremesinghe, the President couldn’t under any circumstances act in a manner contrary to the wishes of 6.2 mn people.

The senior UNPer said the 19th Amendment to the Constitution enacted with the backing of the majority of members representing all political parties in Parliament had stripped the President’s of power to overcome the challenge through unilateral means.

Abeywardena claimed that with the enactment of 19th Amendment, the President had been deprived of the constitutional power to continue in Office following the dissolution of Cabinet of ministers. Abeywardena repeatedly said that those who were all out to oust Wickemesinghe should study the 19th Amendment and see the current situation vis-a-vis presidential powers.

Abeywardena said that previous presidents had been vested with the power to dismiss the Cabinet and to continue in Office under Section 43 (2) of 1978 Constitution. He recalled that the late President Ranasinghe Premadasa had contemplated exercising the constitutional power when he faced internal challenge. However, the issue had been settled through other means and the need for him to dissolve the Cabinet hadn’t arisen. Abeywardena was referring to Lalith-Gamini led bid to impeach Premadasa with the support of the SLFP at that time headed by the late Sirimavo Bandaranaike.

The Galle District MP said Wickremesinghe had wanted to face the NCM though his loyalists felt it should be rejected as it was not legal.

Quoting what he calle relevant sections from the Constitution, Abeywardena said that Wickremesinghe could be deprived of the post of Prime Minister only if he ceased to be an MP on the basis of him losing civic rights on the recommendation of a Special Presidential Commission.

Abeywardena said they weren’t unduly worried about various statements attributed to some members of the UNP and UNF parliamentary groups. He added that it was better for those members to express their views freely. The UNP MPs currently overseas would be back within the next couple of days and the party was confident of defeating what he called illegal NCM, he stressed.