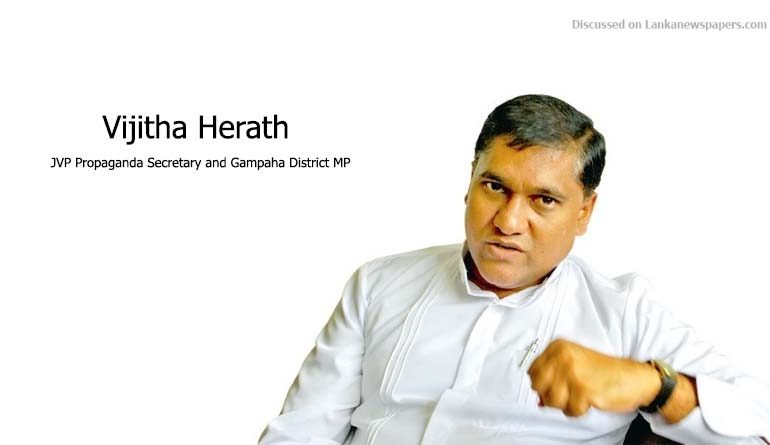 JVP Propaganda Secretary and Gampaha District MP Vijitha Herath said yesterday that all Parliament needs is a simple majority of MPs in the Chamber on the date the No Confidence Motion against Prime Minister Ranil Wickremesinghe was taken to remove him from office.  He said that there was no need for a simple majority of 113 in the House for the NCM to be successful. If there are 41 MPs in the House on the date of the vote and if 21 vote for the Motion and 20 vote against, then it is through, he told Ceylon Today. He also said that Speaker Karu Jayasuriya cannot resort to delaying tactics as he is bound by the Party Leaders’ decision to conduct the NCM.
Here, he is in conversation with the Ceylon Today:

There is now a remarkable decline in the JVP posters that we see today. Your comments?
A: We may not be having people to paste posters, but we are right in front for the causes of the working class, the fisher community and the women and the student classes. We will stand on their behalf.
Your front liners have also deserted the JVP. Once JVP Presidential candidate, Nandana Gunatilleke, contested under the UNP and now is the Panadura Mayor. Similarly, Wimal Weerawansa is with the JO and was a Cabinet Minister during the Mahinda Rajapaksa Presidency. Is there no confidence in the JVP?
A: We have no regrets as those were all whom we expelled from the Party. They are most welcome to do anything they like now!
The JVP was instrumental in a big way in bringing a totally different structure for the new LG polls, but that has so many flaws. Your comments?
A: We made the initial moves but it is up to the Government to correct the flaws.
There was a belief that former leader, Somawansa Amarasinghe did not sit in Parliament despite being the leader. Don’t you think that this would be better for incumbent leader Anura Kumara Dissanayake to also follow suit?
A: There is nothing like that, We believe that the Party Leader also should be in Parliament.
You were also arrested in the second JVP insurrection in 1989 and were in the Beragala detention camp and Kalutara prison as a suspect. What was your involvement?
A: The charges against me were baseless and I was proved not guilty. The allegations were based on the fact that I conducted classes, which the Supreme Court ruled were valid and legal. The Security Forces and the Police personnel who arrested me, were asked to pay me compensation.
What are your views on Dharman Wickremaratne’s book on the second JVP insurrection?
A: We have no objections to anybody writing anything to earn a living but there were a lot of inaccuracies in the book.
But, You have not contradicted anything in the 900-plus pages book even after 18 months. Is that a candid admission on your part that the contents are 100% correct?
A: We cannot be wasting our time correcting other people’s mistakes.